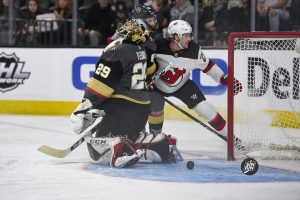 Marc-Andre Fleury has been a part of a lot of firsts for the Vegas Golden Knights. He was the first to record a win, first to take a penalty, and the first to do pretty much everything else goalies can do except for record a shutout (Oscar Dansk stole that one from him). Quietly, and with a little help from a teammate, he also became the first goalie to be credited an assist in a Golden Knights game.

It happened on February 23rd, the last time the Vancouver Canucks came to T-Mobile Arena. Here’s the play.

Fleury kicked the save out to the boards. There’s a board battle in which Jon Merrill shielded the Canucks player away from the puck, however, neither Merrill nor Thomas Vanek gained possession of the puck. The next to touch it was David Perron who fired it up to Tomas Nosek. The rest is history.

Initially, only one assist was awarded because the scorekeepers must have believed Vanek got the puck, but looking closely that never happened.

So, Fleury should have earned the assist as he was the last to touch it, but it wasn’t until a fellow Golden Knight went out of his way to challenge the ruling that the first ever goalie assist became official.

Perron went over to tell them to change it because I should have gotten the assist. -Marc-Andre Fleury

He made a save and I thought it went right on my stick, then I passed it to Nosek and he scored. They didn’t give it to him, and for me, it makes a big difference when a goalie controls his rebound. He deserved it. -David Perron

Apparently, Perron isn’t afraid to challenge rulings. He said he’s done it for Brad Hunt multiple times and even asked the scorers to review the play that many (including myself) believed should have been Tomas Hyka’s first career NHL point.

It’s big for us at the end of our contracts. You try to help these guys out because they are less experienced and might be shy to go do that. -Perron

Fleury remembered the play pretty vividly when we discussed it and joked that he was planning it all along.

I can’t believe the refs missed it. (laughing) -Fleury

And yes, Fleury is the type of guy who has assists on his mind when he makes a pass that leads to a rush.

Sometimes, yeah. I definitely do. It’s not that I care much, it’s just fun to hear your name. -Fleury

Unfortunately that night he did not get to hear his name called over the P.A. system, but that save, which “sprung” the Golden Knights fifth goal of the night will forever be etched in Vegas history as the first assist by a goalie in a regular season game.

They all count, eh! -Fleury

Well, as long as David Perron makes them.