The World Series begins tonight, the NBA just tipped off, college and pro football are in the thick of their seasons, and still the Vegas Golden Knights are in nightly headlines across the country.

I think it’s outstanding for our organization. That’s what it’s all about. We’re being mentioned for the right reasons. We’re winning hockey games, we’re playing well. The group is really taking off right now. -Gerard Gallant

Like us, I’m sure most Vegas fans have gotten calls and texts from out of town friends and family, praising the Golden Knights blazing start. Average Americans are hearing about the NHL’s hottest team in the most unusual places. National magazines and newspapers, cable news stations, local TV, and social media are all trending for the Vegas Golden Knights.

Yeah, it’s great. I think we came out here and proved a lot of people wrong. It’s been a lot of fun. -Brayden McNabb

The coaches and players are aware of the national attention, but they’re careful to stay humble from the recent fame.

“You read here and there. You watch the NHL channel… yeah it’s good. We gotta keep it going. -Deryk Engelland

Engelland’s attitude is echoed around the locker room. The players are happy about their (6-1) start but they know an 82-game season has its ebbs and flows. Forward Pierre-Edouard Bellemare appreciates the attention but prefers to believe it’s about Las Vegas and not the team.

I think it’s good for the town. After what happened, it’s what the town needed to unite everyone. -Pierre-Edouard Bellemare

All this being said, the Golden Knights claim they aren’t paying much attention to all of the attention.

Personally, not really. Sometimes you see stuff on Twitter, but other than that not really. -McNabb

I got two boys running around, so I don’t really have time to sit down and watch the news too much. -Engelland

Heck, some of the Golden Knights are just like us. Normal people trying to forget about their jobs once they clock out. Even professional hockey players like to leave their work at the office.

No. I think we’re all different. I’m the type of guy that won’t look at all, at anything. When I come off the rink, that’s it. If I’m done for the day, I relax with my family. The last thing I want to think of is hockey. -Bellemare 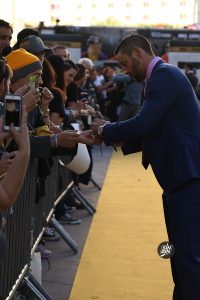 Keep winning, and there will be a lot more of this. (Photo Credit: SinBin.vegas Photographer Brandon Andreasen)

Imagine that, getting paid millions of dollars to play hockey, and then tuning out 100 MPH pucks to the ankle, slashes to your wrist, and punches to the face. NHL players smile with missing teeth for family portraits, these guys earn every dollar.