Any time the Golden Knights head to Canada, specifically Toronto, the major media heads north of the border tend to weigh in on what they are seeing from Vegas. Following the 3-1 loss at the Maple Leafs, the voices of Sportsnet’s Hockey Central were not shy in tearing down the reigning Western Conference Champs.

Vegas played fast last year. They were a fast relentless team. I remember sitting down at breakfast with Gerard Gallant this summer and I said, you know Stastny, he slows things down. I mean I hope the pace is (still) pretty good. Then you throw Pacioretty on that wing and all of a sudden you are saying where’s the pace, where’s the speed with this group. -Doug MacLean, former NHL GM and head coach

We’re all in agreement that the shine on some level for many reasons has worn off on that Vegas team. -David Amber, Hockey Central host

They also had a singled out a specific new member of the Golden Knights.

I watch Pacioretty and he is not the 30 goal scorer we saw in previous years with the Montreal Canadiens. For me, he’s just not engaged, involved. He’s got to find a way to start getting into the trenches to score goals again. I don’t know whether or not it’s just the needle moving at the speed of the game the last two or three years, but if you don’t have that dynamic step it’s tough to get into spots to score goals. -Nick Kypreos, former NHL player

They did go on to praise the Golden Knights for dominating games “territorially” but the overall gist of the conversation was not flattering. 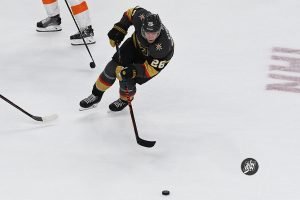 MacLean may end up being right about Stastny, but I’m not sure how he saw it in just three games. (Photo Credit: SinBin.vegas Photographer Brandon Andreasen)

Pacioretty has just two points in 12 games and Stastny did not record a point in his three games. But, to be fair, they’ve yet to play much together and have not played a single game with Alex Tuch.

The good news for the Golden Knights is that after the pedestrian 15 points in 16 games start, they sit just two points out of the playoffs. With back-to-back games coming up on Saturday and Sunday, four points would almost certainly vault Vegas right back into the playoff picture.

Two Stories About George McPhee Surface; One Good, One Not-So-Good