You’ve probably heard us reference Hockey Central a zillion times over the past two years. It can be seen on NHL Network and heard all over North America. Hockey Central is the best daily NHL program offered to fans. George McPhee, Kelly McCrimmon, and Gerard Gallant have all been guests multiple times. On yesterday’s show, hosts Jeff Marek, Nick Kypreos and Doug Maclean spent the early part of the show discussing the emotional night in Las Vegas.

You only have one chance to get it right. They were great. The introductions of players with the heroes… it was the perfect tone last night. -Nick Kypreos, Sportsnet Analyst

The Hockey Central trio genuinely sounded touched by Tuesday nights player introductions, the moment of silence, and Deryk Engelland’s speech. And they weren’t even in the building, just watching on TV.

It was spectacular. The players did a wonderful job. It was terrific to see the heroes, and first responders. It gives them a little bit of healing, which is tough right now in that community. – Doug Maclean, Sportsnet Analyst

Marek brought up Engelland’s moment with the fans and suggested it couldn’t have been delivered by anyone else. MacLean, a former GM and head coach couldn’t agree more. By the way, MacLean promoted Gallant to head coach of the Blue Jackets in 2004.

To get Engelland, who lives in Vegas and feels part of the community. To step up to that mic, it was short but perfect. I thought he did a tremendous job. -Doug MacLean

Once the analysts transitioned to hockey on the ice, they brought up the ‘elephant in the room’, one that we’ve all been talking about. The NHL’s second-leading scorer, James Neal.

He’s a terrific bargaining chip for more assets back. I fully expect him to see him on a contending team by the end of the year. -Kypreos

Kypreos is a well-connected analyst with a strong knowledge of organizational needs. Neal’s value is too big for contending teams to ignore. Some GM will become desperate for his offensive production. Kypreos is only stating what we already knew, Neal is an incredible asset. Now MacLean on the other hand, he sounds more like a head coach than a GM.

Well if they’re going to make the playoffs, they’ll keep him. I know one thing, Gerard’s going to say do we have to trade him? -Doug MacLean 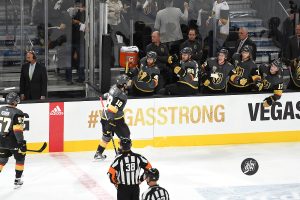 Turk’s got this framed in his office to convince McPhee not to trade Neal. (Photo Credit: SinBin.vegas Photographer Brandon Andreasen)

You can tell MacLean is Gallant’s buddy.

**To listen to the whole show from Wednesday morning, click here.**