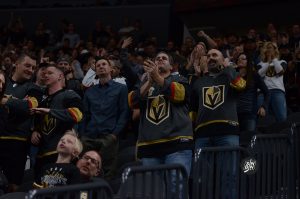 We’re a lot better. We improve every game as a team. Every time we face a bigger challange, like a pair of road games in Anaheim and LA, we come out with points. We’re facing a lot of good teams right now an we are responding well. I think we are making it tough for our GM because we are showing we are ready to win now. -Jonathan Marchessault

One of the lighter moments from Toronto’s locker room was veteran Patrick Marleau agreeing that the Golden Knights as the most impressive story in his 20-year career. Patty Hockey has seen expansion teams launch, and expansion teams relocate since SJ drafted him #2 overall in 1997. An expansion team with 54 points in 37 games is something special Marleau recognized.

Yeah I think so, to come in their first year and do as well as they are, it’s a testament to management and coaching and the players. -Patrick Marleau, Maple Leafs Forward

Toronto Head Coach Mike Babcock suggested after the loss, the game was closer than the 6-3 final. And he also gave the Golden Knights one of the most generic, yet influential compliment.

The energy was good, the whole thing was good. I would have liked us to have been better initially, and put out a lot better game. But in the end it was a better game than it looked, you have to give them credit. I thought they skated well. -Mike Babcock, Maple Leafs Head Coach