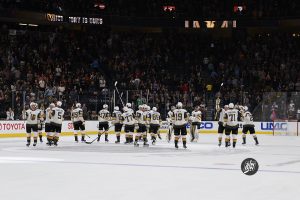 We don't expect a suspension is coming for Mark Stone's hit last night, but it might lead to some fireworks tomorrow night.

The Blues were not happy with it at all. Read what they said... https://sinbin.vegas/supplemental-discipline-not-likely-nor-necessary-for-mark-stones-hit/

David Perron hopes the league will take a look at Mark Stone’s hit on Tyler Bozak.

Periscope coming up in 30 minutes. Aiming for 10 PM.

McCrimmon does not believe the next game is in jeopardy as long as there is not any more news regarding positive tests.