It’s time for a perfectly timed Guest Post. Today we get a post from a Florida Panthers fan who is enjoying the ride of the Golden Knights while also feeling the agony that their success has brought the Panthers. Here’s the Guest Post from Jeff Hwang.

Somehow, 49 games into their inaugural 2017-18 NHL season, the Vegas Golden Knights have the best record in the NHL at 33-12-4 (1.45 pts. per game), and have matched both the 1993-94 Florida Panthers and Mighty Ducks of Anaheim for the most wins in a franchise inaugural season.

The Panthers and Mighty Ducks had 84 games to get there. 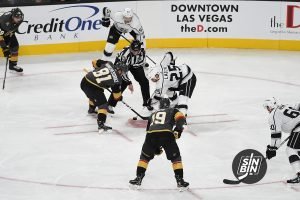 Oh what could have been in Florida. (Photo Credit: SinBin.vegas Photographer Brandon Andreasen)

VGK is 2nd in the league in goal scoring per game, and 6th in the league in goals against. And in fact, once you back out Maxime Legace – the 4th-string goaltender who has played about 14 more NHL games this year than most anyone else would have wished for – VGK goalies are an absurd 27-6-3.

As a hockey fan and a 10-year Las Vegas resident, I could not be more excited about VGK’s initial success and future outlook; on the other hand, having grown up in Ft. Lauderdale as a Florida Panthers fan, it could not be any more painful to wonder how good the Panthers would be right now with Jonathan Marchessault and Reilly Smith, instead of Alex Petrovic and a 4th-round pick in the 2018 NHL Draft.

Which is to say nothing of Gerard Gallant, whose mid-season firing last year as the head coach of the Panthers was something no Panther fan was happy with.

Perhaps strangely, the Panthers are the perfect team with which to put VGK in proper context. The Panthers have everything VGK doesn’t – a true No. 1 center and No. 2 center (Aleksander Barkov and Vincent Trocheck); an elite winger (Jonathan Huberdeau); and a franchise defenseman (Aaron Ekblad). And yet Gerard Gallant is the head coach and Marchessault and Smith are the wingers on the top line of the team with the best record in the NHL, while the Panthers are struggling just to get into the playoff picture.

Which brings me to two points:

1. The increasingly popular idea that the Vegas Golden Knights were gifted a winning team is absurd.

2. VGK was, however, set up to be asset-rich with a deep roster from the start; and that the team is having success should not have been a surprise, even if the team’s current standing at the top of the league is.

The Gifted 1st-Place Expansion Team?
A few weeks ago in this space, Ken Boehlke addressed the apparently growing sentiment that VGK was essentially gifted a winning team in the expansion draft. The reality is that you don’t have to look past the top forward line (Marchessault-Karlsson-Smith) to realize that this doesn’t make any sense.

It was just last year that Marchessault left Tampa Bay to sign with the Panthers for barely more than the NHL minimum salary, for a chance to get off Tampa Bay’s fourth line; Marchessault only got a shot at Florida’s top line (alongside Barkov and Jaromir Jagr) when Jonathan Huberdeau missed the first 51 games of the season with a sliced Achilles tendon. Reilly Smith was the 2nd-line RW alongside Vincent Trocheck, and disappointed after signing a five-year, $25 million contract extension that kicked in this season (Smith recorded 37 pts. with a -13 rating in 80 games last season; he’s already reached 38 pts. with a +23 rating in 49 games so far this season).

After all, Karlsson had only scored a grand total of 18 goals over 183 games in his first three NHL seasons, with a career shooting percentage of just 7.7% entering this season.

As Boehlke noted, the expansion draft was set up so that a team could protect either seven forwards, three defensemen, and a goalie; or eight skaters and a goalie. What this meant was that at least in terms of value, VGK would receive from each team the equivalent of either a second- or third-line forward; a middle-pair defenseman; or something better than a backup goalie.

GM George McPhee parlayed much of that value – and blank cap space – into draft picks where possible. And in terms of the current roster, where the Golden Knights received a player better than prescribed, the player was typically either on an expiring contract (Marchessault, James Neal, David Perron) or on a contract the other team wanted to dump (Marc-Andre Fleury, and Reilly Smith via trade). In other cases, VGK acquired a desirable younger talent from a team that wanted to protect other (better) talent and/or dump bad contracts (William Karlsson from Columbus; Shea Theodore from Anaheim; Erik Haula and Alex Tuch from Minnesota). And then in other cases, VGK got the middle-pair defenseman (Nate Schmidt, Brayden McNabb, Colin Miller, Luca Sbisa) or the fringe forward (Cody Eakin, Brandon Leipsic, Tomas Nosek, Pierre-Edouard Bellemare, Oscar Lindberg) as prescribed.

VGK also somehow managed to pick up goalie Malcolm Subban off waivers, giving VGK as good a goalie tandem as any in the league, while making expansion draft pick Calvin Pickard expendable to trade for more assets.

And aside from James Neal, most everybody on the Vegas Golden Knights roster at the NHL level is having the best year of their careers; and Neal is second on the team in goals.

What the Vegas Golden Knights are doing is magic – and not a gift from the NHL.

Asset-Rich Expansion
There’s no question though, that the Vegas Golden Knights were also set up to be more asset-rich with a deeper roster of NHL talent than any previous NHL expansion team. In his article, Boehlke also produced this chart showing essentially the best available unprotected player VGK could theoretically have selected from a given team as compared to previous NHL expansion drafts:

But not only did VGK get deeper access into every team’s roster compared to previous expansion teams, but also:

1. VGK didn’t have to compete with another expansion team for players. In 1992, the Ottawa Senators and Tampa Bay Lightning competed for expansion players, a year after the San Jose Sharks entered the league and thinned out the player pool. The Florida Panthers and Mighty Ducks of Anaheim competed for expansion “talent” in 1993. And then after the Nashville Predators joined the league in 1998, the Atlanta Thrashers chose from a further depleted pool in 1999, while the Columbus Blue Jackets and Minnesota competed for even lesser talent in 2000.

2. The NHL hadn’t expanded in 17 years. VGK had access to arguably the deepest parts of the deepest rosters since the Sharks entered the league in 1991.

The first point is often completely overlooked, but the impact should not be understated – because not only did VGK not have to draft against another team, but without another expansion team with a blank salary cap to bid against them, VGK also had a full year with monopoly negotiating power to extract full value and make exactly the deals the team wanted to make.

And more than anything else, VGK was set up to be more asset-rich than any previous NHL expansion franchise. In fact, VGK has/had the unique problem of having more NHL talent quantity-wise than they needed, which is in large part how Shea Theodore, Alex Tuch, and VGK’s prized free agent signing Vadim Shipachyov (remember him?) started the season in the AHL – because they were eligible to be assigned to play there while other players weren’t – and why Jason Garrison has spent most of the season there.

Enjoy the Ride
With the contract situations of players like James Neal, David Perron, and William Karlsson, a lot can happen with this VGK team between this year and next, even if it turns out this team is as good as its record says it is and everybody keeps playing out of their minds. Regardless of what happens from here, my recommendation to everybody is to just enjoy the ride.

The two things that really turned me into a hockey fan were: (1) the introduction of the one-timer in NHL ’94 and (2) the 1995-96 Florida Panthers run to the Stanley Cup Final. That Panthers team had very little offensive skill, but had strong goaltending (Beezer!), and face-offed, fought, and forechecked their way to the Stanley Cup Finals, until they ran into the Colorado Avalanche – who did all the same things but also had Joe Sakic, Peter Forsberg, Sandis Ozolinsh, Adam Foote, and Patrick Roy, plus a Uwe Krupp slapshot.

This Vegas Golden Knights team is a fun and scrappy one with a lot of fight in it, and reminds me a lot of that 1995-96 Panthers team – except with a lot more team-wide offensive skill.