Good vs. Bad Teams, Bad vs. Good Teams; The Story Of The Sharks Season

It’s often said that the regular season doesn’t matter beyond eliminating 15 of the 31 teams from playoff contention. While technically it is true and all that really matters is winning four of seven, four times in a row, the regular season does tell a story that can often offer context clues for the playoffs.

The best teams in the regular season do not always succeed in the playoffs, but if you look hard enough, the reasons for their playoff failures were on display at some point. The regular season is the haystack and playoff success or failure is the needle. It’s there, it’s just not always easy enough to see.

All of that was simply a set up to allow this data to stand without being cast aside as unimportant or irrelevant as we head towards a second round matchup between the Vegas Golden Knights and San Jose Sharks. So, here’s the data.

The Sharks finished the regular season with 100 points, good enough to qualify for a playoff spot as the 3rd place team in the Pacific Division. They did so by winning 45 games and earning 10 points via overtime loss. Their points percentage was 61.0% Those numbers are fine, but when you drill down into San Jose’s path to 100 points, it doesn’t look so pretty for a matchup against Vegas or any other remaining playoff team for that matter.

San Jose played 25 games against the Pacific Division minus Vegas. They played five against Vancouver and four against Los Angeles, Anaheim, Calgary, Edmonton, and Arizona. In those 25 games, the Sharks managed a record of 20-3-2 for 42 points. That’s a points percentage of 84.0% and accounted for 42% of the Sharks total points in 30% of their games.

The Sharks earned 65 points in 42 games against non-playoff teams, if you add in the Ducks and Kings, that’s 78 points in 50 games. 78% or their total points against teams who either did not qualify for the playoffs or were swept in the first round.

The other 22% came in 32 games against playoff opponents including the Golden Knights. 22 points in 32 games is a points percentage of 34.4% which extrapolates over 82 games to 56 points, six more than the last-place Buffalo Sabres.

Compare these numbers to the Golden Knights? Vegas earned 109 points in 82 games (66.5%), 36 in their 25 games against those same six Pacific teams (72.0%), and 41 points in 32 games against the 13 playoff teams not including LA, Anaheim, and themselves (64.1%). Extrapolate Vegas’ number against playoff teams for a full season, they finish with 105 points. 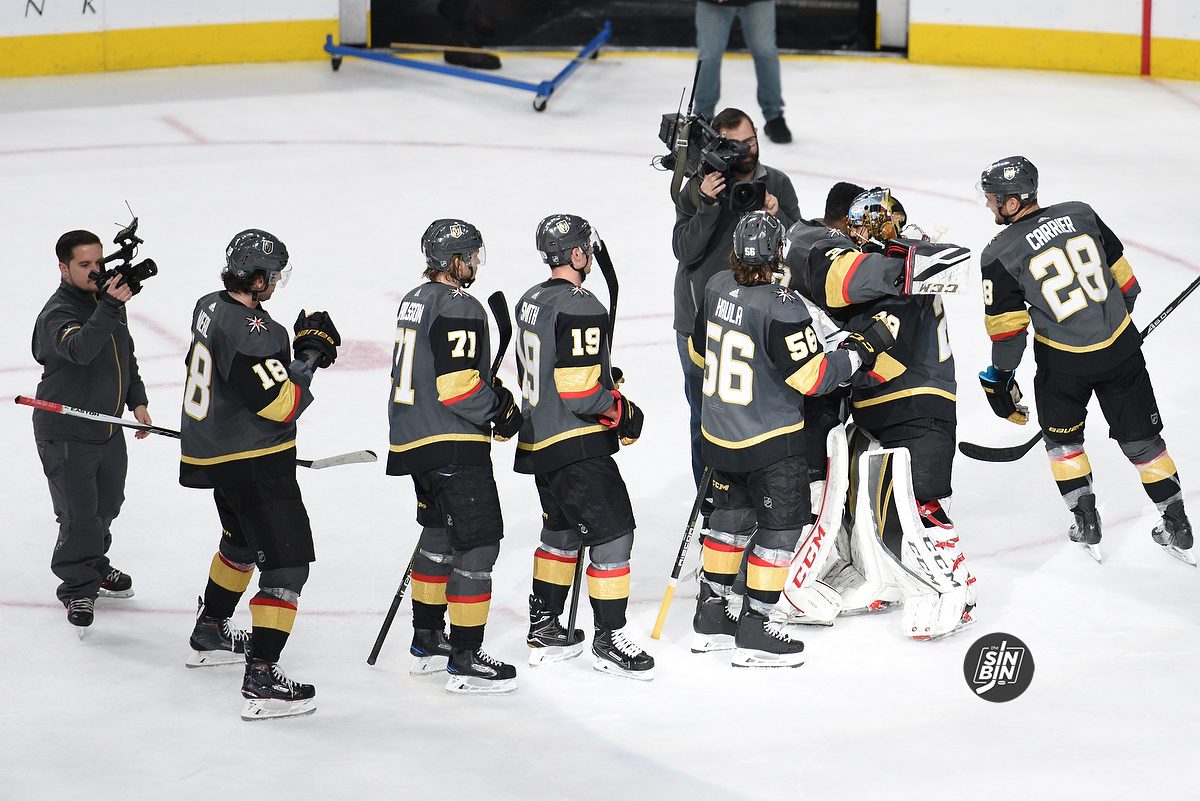 So what does this all mean? Well, the Sharks were very good against bad teams and very bad against good teams. They were clearly better than the six Pacific teams that are now eliminated from the postseason, but by these numbers, they are nowhere close to the Golden Knights. Both Vegas and San Jose beat up on the Pacific whipping boys, but Vegas beat up on the teams still playing too. The Sharks cannot say the same.

But Ken! The Sharks were a different team after they acquired Evander Kane! Not so fast. The numbers do not agree. After adding Kane, the Sharks played 19 games, they went 12-6-1 for 25 points, but they did it by winning nine of the 12 games against non-playoff teams. Since adding Kane, they went 3-5-0 for six points out of 16. Small sample size, sure, but that’s a points percentage 37.5% or 61.5 points over 82 games.

Does this mean the Golden Knights will sweep the Sharks like they did the Kings? Nah, not necessarily, but it certainly makes it seem more likely than it did 600 words ago, right?