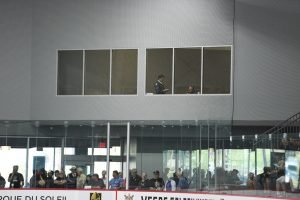 The goal is the same as everyone else in every other sport, to eventually win the final game of the postseason and be crowned the ultimate champion of the sport. However, with an expansion team like the Golden Knights, there’s an understanding by the people pulling the strings that it may not be realistic to do that right away.

One of those people pulling the strings used the word “balance” to demonstrate that point in a recent interview with the VGK Insider Show on Fox Sports Radio.

There’s a lot of hockey to be played. There’s a bigger picture to mindful of. There’s a balance that we are going to try to strike where we want to be very competitive, where we want to continue developing players and improving day to day, but at the same time, the goal is to one day bring a championship to Las Vegas, so those are all the different elements of building this franchise. -Kelly McCrimmon, Assistant General Manager

The balance he’s talking about is between being good now and being good in the future. That balance is at the heart of every single roster move the Golden Knights make. It started with the signing of Reid Duke, continued through the Expansion Draft, free agency, Training Camp, and it will affect every trade, signing, waiving, or anything else the front office does to the Golden Knights roster.

The challenge for fans, and writers for that matter, is that the balance is constantly changing. With every day, every move, and every game that goes by, the plan shifts. Sometimes slightly, sometimes drastically.

It ties back really to the template that was used for Expansion. If you understand the rules of the CBA, which can get a little bit tricky, we didn’t have access to very many players that were waiver exempt, that they could be sent to the AHL without having to clear waivers. We were able to select some good players but they all, for the most part, had to be able to go through waivers. So that made managing our roster a little trickier than it will be for our team in the future and that it is for the day to day for most of the other teams in the NHL, and I’m not complaining about that, it’s just one of the realities. It has put us in a situation where probably some frustration from fans asking why we are doing what we are doing, but there’s a bigger picture in mind. -McCrimmon

Bigger picture and balance. Those are the two factors in the middle of everything, and while fans focus is understandably on the W’s the Golden Knights keep racking up on the ice, the guys behind the curtain remain unphased.

The question is, how many of those W’s will it take before the balance shifts a bit from the future to now and the bigger picture becomes taking a run at the Cup sooner rather than later?

It’ll pain most to read this, but no matter how many wins the Golden Knights amass, it probably won’t be this year. But, if they keep playing well, and more and more players shift themselves from being future assets to pieces of the Golden Knights core, the timeline will undoubtedly shift forward.

The hard part is going to be able to figure out which move falls into which plan, and when/if the “changes” occurred. Those answers will probably forever remain a mystery, or at least until the “George McPhee: How I Built The Golden Knights Into A Stanley Cup Champion” book hits the shelves, but I promise, we’ll keep trying to guess every step along the way.

Oh, and if that book needs an author, I know a guy who might be good for the job.

**I highly recommend you listen to the entire Kelly McCrimmon interview on Fox Sports. Linked it above, but here it is again if you missed it. It really is must-hear stuff for a Golden Knights fan.**