Golden Knights Weren’t Just Off In The First Eight Minutes 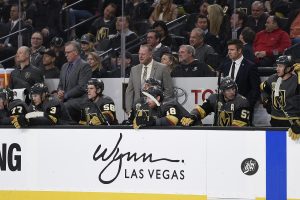 NBC announcers Joe Micheletti and Pierre McGuire used words like panic, upset and frustrated to describe the Golden Knights in Game 1. In the first period, Micheletti even said “Winnipeg is the quicker team” and he wasn’t wrong, at that time. The Jets deserve a ton of credit jumping on Vegas early and winning the series opener.

However, outside of the first twenty minutes of play, the final numbers tell a different story. The Golden Knights average game stats were all out of whack but can take away some positives.

The Golden Knights will shrug off last night and look to move on tomorrow. Game 1 of the Conference finals is a tough game for any road team to win. Slow starts and being off team averages can only make it harder.

I’ll make two guarantees for Monday’s Game 2. First, Vegas will come out strong in the first 10 minutes. Second, Neal, Perron, Haula, and Miller will be determined to create offense. Taking them away will be another focus for the Golden Knights. A win can change the series.

What If I Told You The First 8 Minutes Of Game 1 Weren’t As Bad As You Think They Were?