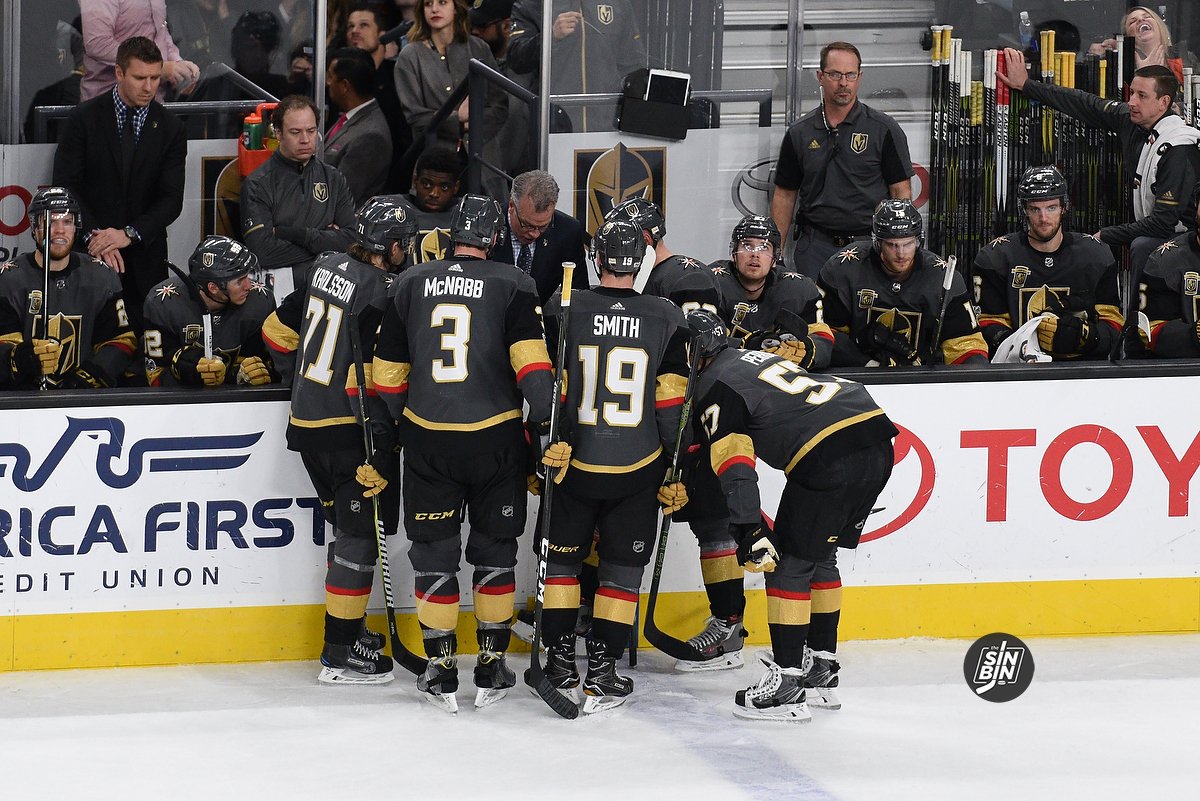 Whenever the league gives the green light to go ahead with the 24 team playoff format that was unveiled earlier this week, the Golden Knights are going to have some tough decisions both in roster and lineup construction.

According to Sportsnet’s Elliotte Friedman, the league is expected to allow teams to have 28 skaters on their active roster along with an unlimited number of goalies. Normally, the entire AHL squad is available to any team still remaining in the NHL playoffs, but with the pandemic restrictions, the league likely wants to keep the numbers down.

So, let’s start with the 28 skaters that I project will make the cut for the Golden Knights.

This is the roster Vegas was expecting to go into the playoffs with had the league continued with the regularly scheduled season. Assuming health when the league is ready to return, there’s no way any of these 21 won’t be listed among the Golden Knights allotted 28.

When I set out to do this I actually expected this group to be a little larger, but the group behind these guys is so large, McPhee and McCrimmon can really go a lot of different ways. Will they load up on defensemen because they have a little bit more of a variety of styles? Will they go with more veteran players to be safe? Or will they put a bunch of kids in the mix so they get a taste of “playoff” hockey? No matter which way they choose, these three will be among the 28 selected.

The most difficult choice was between Bischoff and Coghlan. It came down to the fact that Bischoff is the best combination of experience and reliability the Golden Knights have among their AHL defenseman. Coghlan is much more of an offensive weapon, but without a single NHL game under his belt, it’s a tough ask to put a defenseman on this roster and expect a debut to be made on the biggest (albeit weirdest) stage in hockey.

Elvenes put in a terrific AHL season and was likely held back for development purposes rather than talent. So, without any other place to develop, he’ll be on the playoff roster. I went with Kolesar because he’s the perfect fill-in if the Golden Knights in the event they lose Reaves or Carrier. Personally, I don’t need the “enforcer” type player on the ice, but the organization has shown they prefer to have it, so having Kolesar as a failsafe is likely the way they’ll go. The last one was between Brown, Gage Quinney, and Reid Duke. It mostly came down to experience in this one. Patrick Brown appeared in 8 games in the NHL playoffs last year with the Hurricanes. That’s more than the rest of this list combined has played regular season NHL games (and almost if you count preseason games too). He’s a safe, reliable option that has positional flexibility. In the end, that’s enough to make the cut.

**In the event Cody Glass is available, he absolutely would take Elvenes’ place. However, with his injury previously expected to keep him out until September, it’s unlikely the Golden Knights would attempt to force him back onto a playoff roster in late July.**

Ok, now that we have our roster, it’s time to make the starting lineup for the first game of the round-robin. Here’s my projection as to how they’ll roll it out.

Tomas Nosek ends up being the odd-man-out to start the round-robin. While Nosek was in the lineup for every game Pete DeBoer coached, I expect he’ll ultimately choose Cousins, Roy, and Reaves, over Nosek. Roy was just too good before the pause to have lost his spot when play resumes. DeBoer certainly had a bit of a hand in bringing in Cousins at the deadline and Cousins is the type of player coaches love to have in semi-meaningful games to bring the intensity up a notch. DeBoer loved the Carrier/Reaves combination, trusting them to start pretty much every game he coached, I think he’ll go back to that as well.

The only other tough choice was in the goal. The Golden Knights have remained loyal to Fleury publicly despite bringing in a potential replacement at the deadline. They’ll want to continue proving that loyalty by giving him the nod to start the round-robin. However, that leash is going to be short, and he certainly won’t play all three games before the real playoffs start. It will remain Fleury’s job to lose, but don’t expect it to take much for him to lose it.

Return To Play Roundup For VGK