Tonight, in the first period, the Golden Knights stunk. Their feet were slow, they looked unsure in their own end, and they simply could not break out of their own zone consistently enough to create anything on the other end. Flat out, they were bad. However, much like the rest of the season, it stopped there. 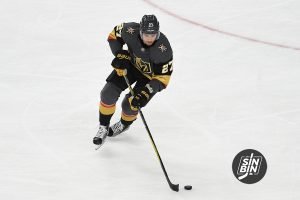 Tonight, even the bad period was rescued by who else, the guy playing against his old team. (Photo Credit: SinBin.vegas Photographer Brandon Andreasen)

Try this exercise. Think of a time when the Golden Knights played a poor period. The 1st against Carolina, the 2nd’s against Anaheim and Dallas at T-Mobile, or my personal favorite (that’s a weird thing to say) the 1st against Colorado on Nevada Day.

Vegas is not immune to a completely garbage period. Heck, they tend to throw up a stinker on most nights, but like a great doctor would do to a virus, the Golden Knights localize it and chop off the infected period to kill the problem at the source. Tonight was yet another example of just that.

After a break, day of travel, you come in and are trying to find your legs and they made us look silly over the first 10 minutes. Big goal by Shea to settle us down and let us hang in there, and then in the 2nd we started to find our game. It’s a communal effort, when things need to be said, guys will say it. –Cody Eakin

Sometimes they have the built-in excuse of the long break, early game, or the first game after a road trip. Other times they don’t, but it doesn’t seem to matter either way.

We do a really good job of coming back in and regrouping. We know what our strengths are and during that break we come in and talk a little bit and we focus up and it’s a great thing about our team. –Shea Theodore

The biggest component of it all though is something very few teams have, confidence. This team truly believes that if they play like they can, and should, that they will win the game. So if there’s a rough period or a challenging stretch, they come back into the locker room and basically all agree that they are better than that. That if they play their game, they’ll win.

It’s all about confidence with this team. I think that’s the main part. We feel confident and we know that we can go back to playing the way we play even if we have a bad period. We always believe we can turn this around and try and not look back. -William Karlsson

Especially this month. They come to the rink and they feel good before the games and they are enjoying themselves and there’s no pressure. Come to the rink, have fun and play. The more we win, the more confident we’ll be. I think in the room we believe that if we play our game we have a good chance to win. -Gerard Gallant

Sometimes like that Colorado one (why it’s my favorite) they score seven goals after the bad period. Other times like tonight, they score three and beat a pretty good team on the road. But every time, save for the Edmonton game, they find a way to stop the poor play and get back on the right track out of intermission.

It’s truly incredible, especially for a team without a designated leader. The Golden Knights chose to run with six alternate captains, and one of them has since been re-assigned to the AHL. I asked around, and got a similar answer from every guy.

It could come from anybody on any given night. No one would tell me exactly who stands up or what they say, just that it happens, and it’s working.

We’ll leave it at that, because, you know what, it is working, and who am I to stand in the way of that?