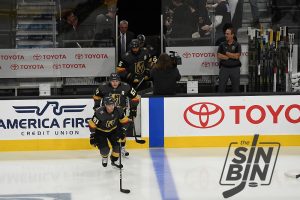 Each player echoed the same message. They’re all leaders. And not just the six of them, but the entire twenty-three man roster. It may be unorthodox but the collection of Alternate Captains could benefit the team. It awards the veterans but allows room for young leaders to emerge.

The day-to-day and how I work everyday. You know what I’ve done in the past, and as I’ve grown as a player and person, and players I’ve played with have helped. I’ve played with some great leaders…Mike Fisher, Shea Weber, Sidney Crosby, Brenden Morrow, Mike Modano, and I’ve learned a lot from them. -Neal

I speak up out there when we have to. I’ve been paired with younger guys and once in awhile you pull them aside and give them advice when I can. The mental aspect of the game can be draining and just being there to talk, can be a good teammate. -Sbisa

I’m the oldest guy here, so it’s normal. Guys are looking at you for help on and off the ice, or whatever they need. You don’t find much pressure… it’s an honor to wear it. -Engelland

It’s a real, all hands on deck approach. One that could really help the development of this franchise. More players with responsibilities could help on and off the ice. The six guardians will help team cohesion, mental pressure and lighten the mood during stretch of tough loses.

Stop me if you’ve heard this one. Six Alternate Captains walk into a bar…