Golden Knights Must Get Back To Being Themselves

The Golden Knights do not have their own “way” like the New England Patriots. They did not come up with a different scheme of play like the “run and gun” Showtime Era Los Angeles Lakers. Nor are they trying to re-invent the game of hockey like the Moneyball Oakland A’s did baseball. But what the Golden Knights have done is carved out a style in which they prefer to play, and when they stick to it, they win. 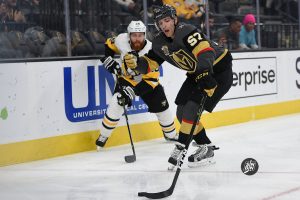 Vegas has been at or near the top of the NHL standings the entire year. They’ve yet to experience a losing streak beyond three games, and when I asked a bunch of players the question, “what’s been the toughest thing your team has gone through this year,” every single guy started his response the same way, by cocking their head to the side and saying “I don’t know.”

We’ve come to know the Golden Knights as a fast, quick, transition heavy, high scoring chance team that never believes its out of a game and very rarely, if ever, partake in the rough physical style of play commonly seen in the Pacific Division. Whether this is the reason or not, Vegas had jumped out to a 16-1-1 record against the seven teams in their division. They were undefeated against the likes of the Kings, Ducks, and Sharks before the last 10 days. Then Tuesday happened, and those Golden Knights were nowhere to be found.

All year we haven’t really gotten into scrums all that much. We need to play the way we’ve played all year. We’ve had success and I think for Ryan he is trying to make an impression. When we were in St. Louis it was about getting into the net all the time with Coach Hitchcock. I think that he came here and he wants to do that, he wants to show that he cares, he’s got to learn though a little bit about the way we play. I don’t think he’s going to have a problem with that. -David Perron

Perron did not put the blame on Reaves, in fact, the question (which wasn’t asked by me) wasn’t even about changing the style. At times in that chat with multiple members of the media he talked about turnovers, transition, breakouts, and a number of other mishaps that took the Golden Knights away from what they normally do on the ice.

So, I asked, how important is playing the same style that got you here going to be for the remainder of the season and onward into the playoffs?

We’ve got to do that, that’s the only way out. You saw teams like the Detroit Red Wings, all the years they had success, everyone was going to go in and try to bully them and they didn’t change their style, and it worked out. We’ve got to make sure we have a good balance of when to play really hard and when to not over do it. -Perron

It’s really important. That time of the year you can’t be looking for your identity. We know our identity. We just have to bring it every night. If we do that and we just play smart, we’ll be fine. -Jonathan Marchessault

It was just one game, but it was a frustrating one to watch. The Golden Knights not only lost, but they appeared to almost be acting like another team. Luckily, the points in the standings were insignificant to the Golden Knights, and they have plenty of time to turn things around and get back to being who they are, being the team that went from 200:1 shots to win the Cup to favorites in sportsbooks across the valley.

We just have to make sure we worry about our game and not worry about anything else. -Perron

And that needs to start tomorrow night and not stop until they’re drinking Foley Family wines from Lord Stanley’s Cup in June.