It should come as no surprise at this point in the year that the Vegas Golden Knights have re-written, or are on the path to re-writing, just about every record in the expansion/inaugural season record book. As they head into the All Star break the Golden Knights sit atop the Western Conference with 68 points on 32 wins. 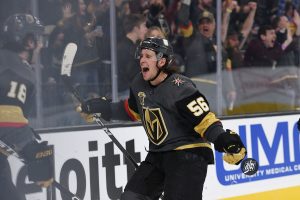 Since the NHL broke into two conferences in 1968 there have been 42 All Star games, which means 84 teams have led the conference in the standings at the break. Arizona, Carolina, Columbus, Florida, and Winnipeg have never done it.

By doing it in year one, the Golden Knights join the Ducks, Kings, Wild, Predators, Penguins, Sharks, Maple Leafs, and Canucks who have all only led the conference at the break a single time.

That’s 13 teams of the Original 30 who have either never done it or done it once in their entire existence, and one from the Original 6. Yet, Vegas did it in the first year of their existence.

But what does leading the conference at the All Star Break actually mean? Well, first, all 84 teams made the playoffs. Next, 34 of the 84 (40.1%) went on to represent their conference in the Stanley Cup Finals. And finally, 20 of them (23.8%) went on to win the Cup.

Recent history isn’t nearly as kind to the conference leaders at the break as only three teams have made the finals since 2003 (3 of 20 for 15%) and only one of them went on to become the champions of the NHL (1 of 20 for 5%). But we’re going to choose to ignore this and focus more on the last paragraph.

No matter how you slice it, the Golden Knights aren’t just making history for expansion teams, they are doing things teams who have been around since the 90’s have never done and matching something the Leafs have had a 99 year head start on. Pretty crazy.

Conference leaders at the All Star break