The Hockey News is doing a series called “2020 Vision” in which they attempt to predict the future of what each NHL team will look like three years from now. Last week, they took on the Golden Knights roster. 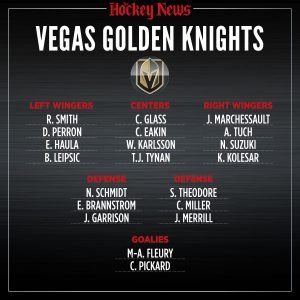 Vegas will be weak at center this year and it will likely be a sore spot until Glass takes the throne – and that’s if he takes it, because we are projecting on an 18-year-old here. Continuity will also be key, as roster turnover must be kept to an acceptable level so the team can gel over the years. -Ryan Kennedy, The Hockey News

While Kennedy believes the Golden Knights have to be careful about roster turnover, I believe the exact opposite. Of the 30 players selected by the Golden Knights in the Expansion Draft, Kennedy has 12 still on the roster in 2020 (plus Tuch and Theodore), I expect that number to be closer to five or six.

First off, the Golden Knights will win the 2018 Lottery and select Rasmus Dahlin. I added Hague to the third line on the defense. Also, Jake Leschyshyn who was drafted in the second round by the Golden Knights (and has a torn ACL) cracked the list.

Two names should jump off the page here, first Carl Hagelin. He’s got two years left on his contract before hitting unrestricted free agency. It’s a bit of a shot in the dark, but if the Golden Knights are going to the playoffs in year three, they’ll need to make some big UFA moves.

The other is Nicklas Backstrom. Washington is going to eventually have to start completely over. They’ve begun the rebuild process a bit this offseason, but if/when things don’t work out, they’ll have to go all in on a rebuild. After the 2019 season, Vegas will trade for Backstrom’s UFA rights, and will sign him before July 1st.

Finally, the goalies. No, I do not expect either to be here long term. Fleury will be out of here either at this deadline or the next and Pickard will take over. Hopefully I’m wrong and Pickard surprises, but I don’t expect him to be the long term goalie of the future. I’ve slotted in Jiri Patera and Oscar Dasnk, but that will be a major weak spot in 2020 if it’s not Pickard.

Go ahead, bookmark this article, you’re going to be shocked at how accurate it is in three years. Feel free to post yours in the comments too, it’ll be worth a good laugh in 1000 days.