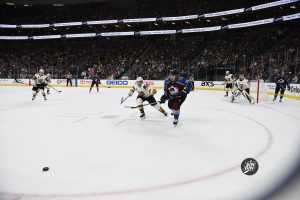 Luca, the good guy is about to go out there. Luca? Hey, where’s Luca? Doesn’t he know we really need him tonight? (Photo Credit: SinBin.vegas Photographer Brandon Andreasen)

As you’ve read on SinBin.vegas, containing individual talent has been a key factor in the early success of the Golden Knights. Today, on a day in which the Golden Knights are set to face the league’s superstar, we’re taking a closer look at how Vegas has done against each of the previous stars they’ve faced.

Our sample includes 21 star players over the course of the first 16 games of the season. 13 stars performed under their points per game averages, including eight who went scoreless against the Golden Knights. While only eight of the 21 exceeded their average against Vegas. Plus, you could argue at least four of the eight (Jack Eichel, Evander Kane, Patrick Kane, Erik Karlsson) were skewed by late-game, man-advantage points.

It’s no secret, Connor McDavid will present a major problem tonight. To continue their shutdown strength, the Golden Knights will have to deal with McDavid’s (1.118) points per game problem. He’s clearly the hardest assignment and that job has gotten tougher with Luca Sbisa out of the lineup.

As Nate Schmidt said (and Ken tried to further explain) it’s going to take everyone to shut down the Oilers, but I’m confident. He can’t be that much better than everyone else on this list, can he?

Note: I am well aware of the answer to that question. I’m just choosing to act oblivious because I don’t like the answer.