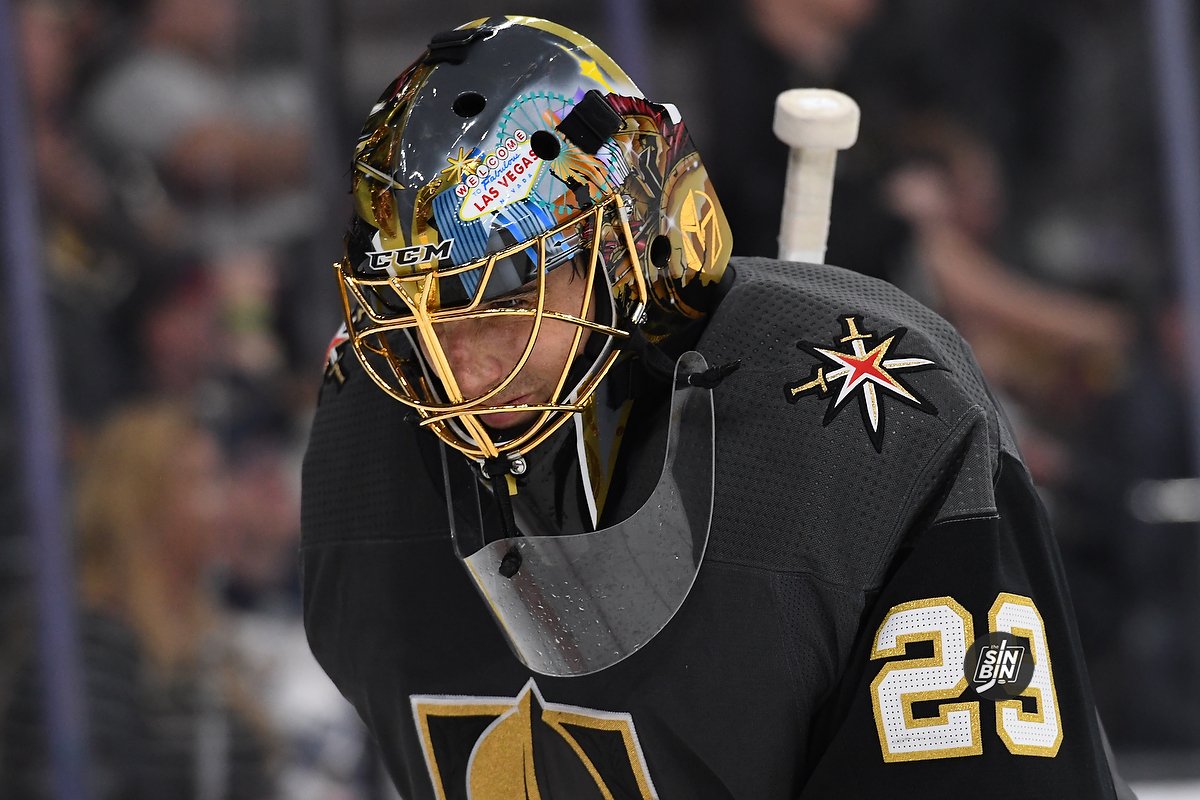 If Fleury was anything short of incredible, the game in Chicago would have been a disaster. (Photo Credit: SinBin.vegas Photographer Brandon Andreasen)

For a majority of this season we heard the same thing from players and coaches, they are playing well, but just not getting the bounces. You’ve also heard from us here at SinBin.vegas that the Golden Knights PDO is bordering on lunacy and they are headed for being one of the unluckiest teams in the history of the sport.

Then, last night’s game in Chicago happened. The hockey gods finally felt as though they had taken enough from Vegas, and they found it time to give it all back, all in a game that will go down as the Golden Knights’ franchise record for most goals scored.

But, what if I were to tell you that the game the Golden Knights played in Chicago may have been their worst of the season. Yep, worse than Opening Night against Philadelphia, worse than the debacles in Boston, Pittsburgh, and Washington, definitely worse than the embarrassing one in Montreal, and dare I say, it may have even been worse than the 7-2 drubbing in Calgary.

It’s because they were a mess defensively for the first 32 minutes of the game and the Blackhawks just simply didn’t finish their chances. To make matters worse for Chicago, they then turned around and made terrible plays to essentially hand Vegas goals.

We were up 3-0 after 1 but I didn’t think we played real well. Chicago had some great chances, Fleury made some real key saves. Truthfully, it probably should have been 3-3 after the 1st period, but then I thought we played a better game after that. -Gerard Gallant

3-3 is kind. It could have been 8-1 in favor of Chicago. I went through and watched the game again, and I counted 14 legitimate scoring chances and seven that I would consider Grade A chances. (I took notes over the 1st and 2nd period. They’re posted at the end of this article. If you can’t believe it was as ugly as described, check them out, or even worse, watch the game again.)

All five of these chances happened with the score 0-0, 1-0, or 2-0 and the Blackhawks did not score on any of them. In fact, the final one was the play that directly preceded Vegas’ third goal.

Coach may have come in and said something… (smile)… maybe. But we knew in this locker room that Flower bailed us out a few times. That was a game-changer honestly. -Alex Tuch to VegasGoldenKnights.com

And those are only the ones I found most dangerous. That doesn’t include about 10 others that were mostly missed opportunities for Chicago. Pucks jumping off sticks, missed shots, never getting the shot off, slightly missed passing. You name it, VGK allowed it in the 1st period. Oh, and we haven’t even mentioned the horrible turnover that led to Chicago’s only goal in the period… which was subsequently taken away due to an offside challenge.

But why are you pointing this out? They won the game.

Because the Golden Knights number one problem this season has been consistency. They play a great period in Montreal, then back it up with a stinker and blew the game. They play a great game against Minnesota, then turn around and play poorly in Buffalo. Beat up on Edmonton, then got destroyed in Calgary. The results changed last night, and no one should be upset about it, but the road woes are still a major concern.

Imagine how you would be feeling if just three of those chances in the 1st period went in. Then Chicago added two more (they dominated the first 12 minutes of the 2nd period too) and the score was 5-3 or even worse 5-1 like it could have been. We’d probably be right back where we’ve been so many times this year, falling back down the stairs we felt we had just climbed up.

There’s a lot more to hockey than the final score, and while the score is the only thing that’s left behind from a game, the story of how it got there is much more telling as to what’s going to happen next.

The Golden Knights have won four straight and five of six. They’ve stormed back from 7th in the division to 3rd and are just a few points out of 1st. But, they are still inconsistent, they still have struggles on the road, and there’s still a lot that needs to be corrected. The good news is, we’ve seen what it looks like when corrected, and it results in a 60-minute thrashing of San Jose Sharks.

The Golden Knights remain the reigning Western Conference Champions and there’s no doubt, having watched every game all season, they are good enough to do it again. But they need to play the way they can more often than they have, and they really shouldn’t be satisfied with beating a bad team 8-3 when they truly didn’t deserve such a fate.

It was a fortunate outcome in a season that’s been riddled with unfortunate ones. That’s why they play 82 of them. (Well, that and making the owners a ton of money.) But the game in Chicago should not be celebrated in any way. Instead, it’s more like when you find yourself distracted while driving, look up, and you narrowly missed totaling your car. We’ve all been there, miraculously avoiding a bad accident. You get that rush of adrenaline. For some of us, it’s a wake-up call that we caught a break and we need to pay more attention, for others, it’s cast aside as nothing. “Pft, I knew exactly what was going on, never in danger at all.”

Hopefully, last night’s game is another wake-up call for the inconsistent Golden Knights, because the last time it happened (at Calgary) they turned around and ripped off three of their best efforts of the season. That one, they totaled the car, and has no choice but to face the music. This one was the near miss and in many circles are actually being lauded for their 8-3 record-setting win.

Are the Golden Knights the conscientious driver who puts down the phone and focuses after their near miss, or are they that punk teenager who thinks he’s invincible? We know how both of those stories end, and hopefully, VGK takes the right road, because if they don’t the inevitable crash is coming, and nobody wants to see that.

16:28 – McNabb loses it at blue line, Pacioretty backchecks to save chance, McNabb pickpocketed from behind

12:54 – Holden throws it away, Kane retrieves, leads to icing

11:53 – Holden turnover leads to 3 great chances, Fleury unreal to keep them out.

11:14 – Saad chance in on McNabb a bit slow getting back, almost killed Flower.

9:35 – Kane weird angle shot, then Keith from the point

6:50 – Bad pinch Miller, leads to breakout and breakway chance that is missed over the net by Strome

6:10 – Engelland caught up high (with cover) but gets outraced back into the play by Debrincat. Leads to open shot, missed.

5:44 – 3-on-1 due to Theodore rushing up for transition (wouldn’t say bad play, but aggressive with the puck not in clear possession) Chicago gets wide open shot off 2 passes, Fleury incredible save

9:17 – Reaves good job getting it out, Carrier drives, sends one across, Reaves good chance, fans.

7:47 – Crawford horrendous pass along the boards, then doesn’t get back, Tuch scores.

15:57 – 3 shots from point, only 1 really dangerous, but definitely could have been in

14:48 – Eakin has it taken away in own end, Kane with super dangerous shot, saved by Fleury, leads to Kane taking frustration high stick penalty

8:50 – 4 VGK lose a stick battle vs one CHI. Leads to scramble which CHI scores on

6:50 – Carrier with a dangerous chance

0:05 – Theodore excellent job in-and-out to get shot through, Goal