Following their second game against the Vegas Golden Knights, the head coach of the Dallas Stars said this…

When he says fast, we normally equate that to skating speed. Connor McDavid is fast. Patrik Laine, Nathan MacKinnon, and Nikita Kucherov are all fast. David Perron, James Neal, Reilly Smith, Jonathan Marchessault, Erik Haula, and William Karlsson, are they really the top six forwards for the fastest team in hockey?

I don’t know if we are that fast to be honest with you… are we? Outside of maybe Tuch and Haula I can’t think of many guys that are extremely faster than everybody else. I just think we play well or each other and we do the right thing. You look faster when you execute plays when you are playing well together. For me when I’m executing all my plays I look faster than I really am. –David Perron

What they actually are is quick.

I think our game is a quick game. I think we’re a quick team, we’re a fast team. I think we are a little bit quicker than we are fast though. -Gerard Gallant

It’s about playing fast rather than actually being fast. When the Golden Knights are rolling, they make instant decisions and then string them together. The puck moves quickly and they are able to get from their own zone into the attacking zone in a short period of time. It gives the allusion of speed, but it’s really smart decision making, spacing, and precision.

Here are a couple examples of just that.

Not once in either of those goals is pure speed used to set up or score the goal. Instead, what the Golden Knights do is make simple decisions, quickly. They create turnovers, then jump into transition.

We’re not fast but we want to play fast. So when we have the puck we want to move it quick. We don’t have amazing speed up front or in the back. We just make decisions quickly. -Jonathan Marchessault 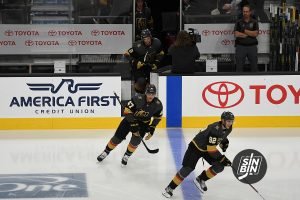 That brings us to the last two games. Against Dallas, the Stars did everything they could to stay connected to the Golden Knights players, specifically in the Stars attacking zone. When they turned the puck over, which was rare (seven giveaways to Vegas’ 15), they were always close to the Golden Knights player they needed to mark. They made in incredibly difficult for the defenseman to make that quick pass to spark the Golden Knights transition. When Vegas did get it out of their own zone, the neutral zone was clogged up and Vegas often had to dump the puck into the zone rather than carry it in. The puck never got moving because there was never space to move it, and Vegas doesn’t have fast enough skaters (aside from Tuch, who was fantastic in that game), to create the space.

In Minnesota, the Golden Knights did a much better job of creating space with quick passes. The Wild were not able to slow the Golden Knights down like the Stars were, which led to much more offensive zone possession.The Golden Knights were able to create scoring chances, and it led to a much more competitive game, one Vegas could have won if not for some unfriendly posts and excellent goaltending. What Dallas did in the offensive zone and through the neutral zone, Minnesota couldn’t and it’s why Vegas looked like their old selves again.

We talk about our team all the time, we’re not a big physical team, if we are going to be successful we’ve gotta be quick and fast. -Gallant

On to tonight. Against the Jets the first time, Vegas scored five goals and created many more high-quality scoring chances. Of the five goals, three of them were born directly out of quickness in decision making.

The first is the video above. Perron creates a turnover below his own goal line, a few quick passes later, Perron is now in the offensive zone snapping one by Connor Hellebuyck.

The second came on a Golden Knights power play. After a saved shot, a Jets defenseman attempts to clear the puck. It ends up directly on Neal’s stick, who wastes no time in putting it in the net. It’s not transition play, but it was a quick decision that was caused by the Golden Knights forcing a turnover.

The final one came shorthanded, and it’s exactly what Vegas does best.

Winnipeg dumped the puck in, Engelland chased it down and quickly got it over to Sbisa before the danger came. Before Sbisa was in trouble he moved it to Smith. Smith made the smart play off the boards, and it ended up beating the forechecker. Karlsson read the play perfectly and headed directly up ice. Smith hit Karlsson on a stretch pass and the rest is history. Karlsson uses a bit of speed to get all the way to the net, but it wasn’t his speed that created that goal. It was simple, quick passes, followed by a smart read by both Karlsson and Smith. That, is Golden Knights hockey, and they did it down a man at the time.

The Jets are the third team who are getting a 2nd look at the Golden Knights. Arizona seemed to get much better with their extra looks at Vegas and Dallas improved immensely.

The Golden Knights played their signature quick game against the Jets the first time, and it ended up getting Hellebuyck run from the game and resulted in a dominant 5-2 win. It’ll be interesting to see how Winnipeg changes their game tonight because if they don’t, they won’t be singing Celine Dion.

Jets, Hellebuyck Have Redemption On The Mind