On numerous occasions this year, TSN’s legendary reporter Bob McKenzie has declared the Golden Knights to be the best story he’s ever covered in hockey. For an expansion team that goes on to tally 109 points, never experience a four-game losing streak, dominate the Western Conference, and eventually be crowned champions of the Pacific Division, it’s hard to disagree with him. But every great story needs an ending, and not every ending is as great as the story that led up to it.

When you go into the playoffs you are not going to be satisfied just to be in the playoffs. Right now my expectation is to have a great series and move on to the next round, but I understand that all over the town the expectation is a little more than that because we aren’t going to lie to each other, it’s a cool story, we are a cool story. So when we stop, everyone is going to be like “ahhh, it’s too soon,” for everybody, not just for the players, but for the town. -Pierre-Edouard Bellemare

It’s been a ride that’s captured the hearts of every resident of Las Vegas, most hockey fans, and the sports world in general, but what will the Golden Knights do next?

I think there is a hope. The expectation from the media is “I hope this team goes far” because it’s been a great story and nobody wants it to end. -Bellemare

That hope brings unique expectations on the Golden Knights. Unlike the Predators, Penguins, Capitals, Lightning, Bruins, or any of the other top teams, Vegas isn’t necessarily expected to win the Stanley Cup. But also unlike the Avalanche or Devils, the Golden Knights are not without outside pressure to perform.

I don’t like the word pressure. That word, I just don’t like it. I think it brings negativity in the air. I don’t know what word would be better, but I just don’t like the word pressure. I know the swings that you go through, good and bad. I’ve been down (in series), I’ve been up in series, and you’ve just got to ride those things and you’ve got to stick together as a group, and just have fun with it. This is supposed to be fun and hopefully it lasts a long time. -Erik Haula 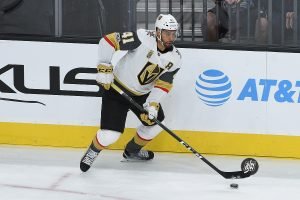 The last thing anyone wants to be is a disappointment, and there’s really only one way for the Golden Knights to avoid that, as unfair as that may seem. (Photo Credit: SinBin.vegas Photographer Brandon Andreasen)

This team is unlike the other 15 competing for the same prize this postseason. They’re playing with house money, but they also have the hearts of a new fan base in their hands, and they have an obligation to the story that they’ve written. Like it or not, the story depends on the ending. No one can ever take away what’s happened over the past six months, but a sad abrupt ending is much different than an ending with Gary Bettman handing the Cup to Deryk Engelland.

Maybe Haula is right, maybe pressure isn’t the right word. They aren’t like anyone else, so why should we use the same word, negative connotation or not? But that’s not to say pressure, or whatever we’re going to call it, doesn’t exist.

It would be a let down if anything but the perfect ending occurred. Like a boy with his father, the worst thing he can do is not to anger him, it’s to let him down. “I’m not mad, I’m just disappointed.” Are there any worse words to hear than those?

That’s what the Golden Knights face as they head into the playoffs. They can’t anger the City of Las Vegas. The fan base has fallen in love with them quicker and deeper than anyone could have ever imagined after just 82 games, but here we are, one of the 16 that get to participate in the tournament, and the Golden Knights have as good a shot as anyone to win it.

It’s been the perfect story and now it needs the perfect ending. Anything less would be “too soon.”

That is pressure, unique pressure, but pressure nonetheless, even if Erik Haula doesn’t like the word.

The conversation which led to the quotes from Bellemare in this story was so good, that we figured you should be able to listen to the whole thing, so here it is.