The Golden Knights draft got underway one day later than most teams due to the trade that sent Vegas’ first pick to the Red Wings for Tomas Tatar. On Day 2 of the Draft they have seven picks starting with #61, the penultimate pick of the 2nd round.

Here’s a quick rundown of what we know about each player selected by the Golden Knights in the 2018 NHL Draft.

Ivan Morozov has been very noticeable both in the MHL and for Russia U18 NT with his skillset and 200ft game. -@RUSProspects

Watch the hands of Ivan Morozov, as he steals the puck and goes solo in today's MHL play-off action. #2018NHLDraft pic.twitter.com/n2hrsLJQD8

Ivan Morozov with the interception and nice finish. 5-3 SHG that is! #2018NHLDraft pic.twitter.com/ki7PjDCUcv

Morozov has a two-year contract with SKA, will honor that, plans to come to US afterwards 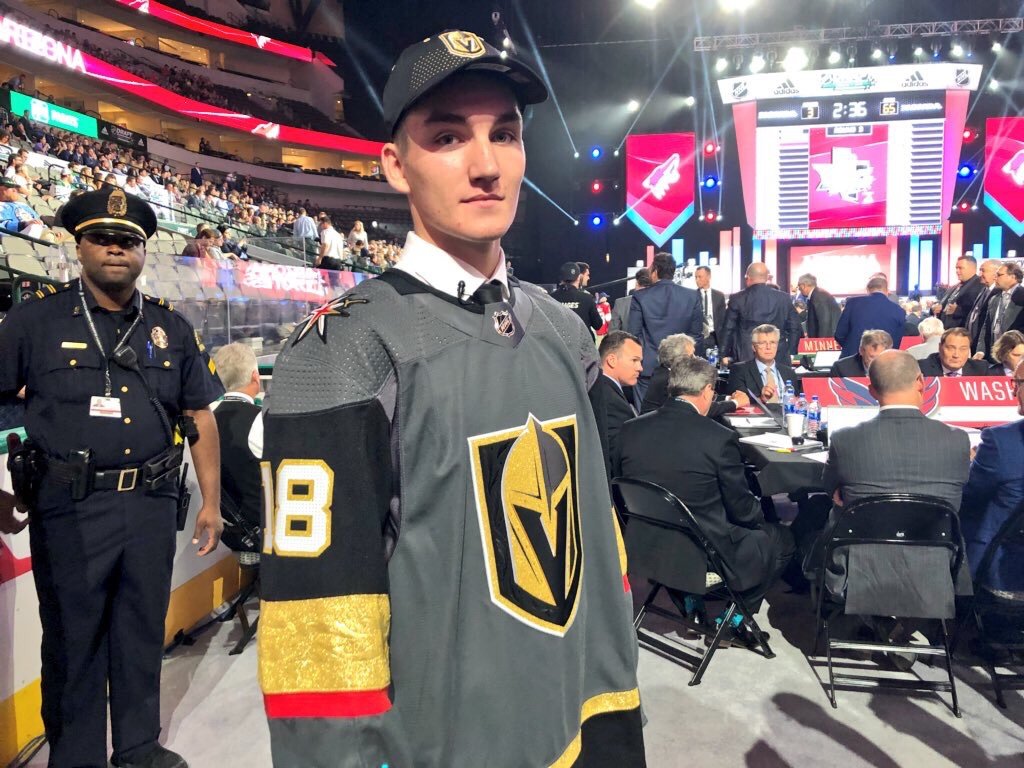 A California-born defenseman who last year was one of the best (and youngest) 2018 first-year eligibles to play in the BCHL. Demin, a Denver commit whose CHL rights are owned by the WHL’s Everett Silvertips, will play for Team USA at the Ivan Hlinka. He’s got good size, a hard shot and skates extremely well. Demin is a three-zone defender who plays more mature than you’d think, and he didn’t crack under the pressure of consistently playing against opposing top lines. If the Americans want to repeat the success they had at last year’s Hlinka, they’ll need Demin’s puck-carrying skills and well-timed pinches to set the tone for what is sure to be a swarming attack. -Steve Kournianos, TheDraftAnalyst.com

"Demin is one of the best defenders in junior A hockey. He is very tough to beat one-on-one maintaining excellent gap control. He uses his strong skating and lateral agility to keep himself between his opponent and the net at all times." –@LastWordOnPuck

Cotter: “To be drafted by an organization that’s so successful early on, it’s incredible.”#VegasBorn

Paul Cotter said he plans to attend VGK development camp next week and looks forward to making a good impression. He also is sticking with his plan to attend Western Michigan this fall.

Crafty playmaking forward with the ability to finish who always seems to be in the right place at the right time. Cotter, who is committed to Western Michigan University, was one of the top scorers in the NAHL before earning his way onto Lincoln’s deep lineup. He is a strong finisher around the net and develops quick chemistry with whomever his linemates are. There was an expectation that he would be more of a two-way depth player during his transition to a superior league, but Cotter has developed into a scoring threat thanks to his deadly shot/release combo and very good straight-line speed. You never have to worry about him failing to show up — he battles hard and competes from whistle to whistle, plus can create problems during the forecheck. -Steve Kournianos, TheDraftAnalyst.com

Named to the WCHA All-Rookie Team … appeared in all 41 games for the Falcons on the season … tallied 33 points by eight goals and 25 assists, the most of the freshman class and second most on the Bowling Green squad. -BGSUFalcons.com

He is a good skater with good mobility and puck skills which allow him to carry the puck from the back end and beat forecheckers. Connor is strong along the boards at both ends of the rink and uses his physical size to his advantage. Connor’s versatility will be a big asset for him moving forward in his hockey career. -Dominic Tiano, OHLwriters.me

He’s a mobile, offensive-minded defenseman who skates well. He gets pucks on net from the point, can break it out of his own zone and start the transition. He has a good stick, but his play in his own zone is still a work in progress. -Jeff Cox, SBNCollegeHockey.com

Bigger things were expected from the sophomore defenceman this year. Things haven’t panned out exactly as hoped though. Bouchard’s numbers dropped as he put up three goals and 18 assists for 21 points in 65 games. He also went from a respectable -4 as a rookie, to a -30 in his second year in the league. These drops should be concerning, especially as there was little change in the fortunes of the Baie Comeau team. They finished 13th out of 18 teams in the QMJHL in both seasons. -Ben Kerr, LastWordOnHockey.com

Vegas takes chance on Xaxier Bouchard, who suffered tough sophomore year. Per @ScoutingService, he "remains a smart hockey player, he’s always been one & it’s a big reason to still believe in him." Per @FCHockey, he's "rangy puck-moving defender" who can be more physical.

“-Maintained a .904 save percentage in 24 games for London in 2017-18
-Won the Dinty Moore Trophy for the best rookie goals-against average in the OHL (3.11 GAA)
-Named to the OHL Second All-Rookie team” -Vegas Golden Knights Press Release