When the Golden Knights have lost in the playoffs, and it hasn’t been often, they’ve always found a way to correct their wrongs. They’ve learned from their mistakes, fixed them, and have not fallen into the same traps that saw them on the wrong end of the scoreboard the previous game. Many times in the postseason they’ve even won games, still realized their errors, and cleaned them up the next time out. 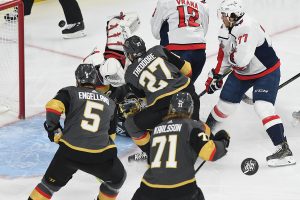 Tonight, they did not.

They fell into a hole, they didn’t get enough traffic in front, they didn’t forecheck as a unit, they couldn’t break through the clogged up neutral zone, and they didn’t finish the chances when they were there. Problems in Game 2 were problems in Game 3 and that is not normal for the Western Conference Champions.

They’re winning a lot of the battles, blocking a lot of the shots and we haven’t been good enough at finding a way to be successful against it. Just go home, evaluate and get better. -Cody Eakin

In addition to the “old” problems of Game 2, there were a few new ones as well.

We aren’t getting enough shots at all. It doesn’t cut it, it’s not good enough. -Alex Tuch

Falling behind didn’t help either.

They came out in the 1st period and set the tone real good and again we were chasing them all night. -Gerard Gallant

Game 4 is about finding a way to correct these issues. They’ve done it all year, they’ve got to do it again.

We’ve got to be better and we will be better for Game 4. -Tuch

The “must-win” Golden Knights need to show up to Capital One Arena on Monday.