So, when you flip through the scouting reports of the first player the Golden Knights selected in the Draft this year, there’s good reason for concern. Here are just a few snippets about the 48th overall pick, Matyas Sapovaliv.

His lack of speed doesn’t just affect him in the defensive zone or when coming off of the walls either. His lack of top-end north-south speed forces him to make plays at half speeds more often than a lot of other forwards in transition. –NHL Black Book

He lacks agility and explosiveness, and despite his strong two-way play, he needs to skate backward quicker to improve his defensive abilities. If he wants his offensive prowess to translate to the faster AHL and NHL level, he needs to improve his skating. -Sean Raggio, TheHockeyWriters.com

Will need to improve his mobility and processing speed as he matures but has middle-six NHL potential. -Nick Richard, DobberProspects.com

It was evident to the Golden Knights too. Assistant Director of Player Personnel Bob Lowes mentioned he and his staff understand the issues with his skating. He also said he believes it’s correctable and that’s why he became a Golden Knight.

We had our skills coach look at his skating to see if he could improve it. We also had our sports science people at the Combine evaluate the athleticism, physical growth, and strength that can happen and they both felt he’s very athletic and the best is yet to come in his skating. -Bob Lowes, VGK Assistant Director of Player Personnel

The Golden Knights see one specific area that can be improved physically.

The thing about his skating is it’s more based on (lacking) strength. He’s very tall and very lean. He’s playing both special teams and 22 minutes a night as a centerman. At times you’d see his stride break down but we’re real confident in our due diligence that this is going to get better and with strength his skating is going to improve. -Lowes 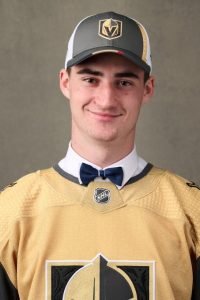 According to most scouting reports, this lack of skating speed, explosiveness, and quickness hinders his game in every area.

Yet, despite it, he managed to post 52 points in 68 games in the OHL, score a pair of goals and add seven assists at the Hlinka Gretzky Cup, while being widely regarded as one of the best defensive centers in this draft class.

If the Golden Knights are right, and they can turn his skating from a weakness to a strength, they may have found the gem in the 2nd round. But, if the improvement is not vast, he has almost no chance of making an impact at the NHL level.