Reid Duke, you’ve got company, and it’s in the form of a SKA St. Petersburg’s Vadim Shipachyov. The 30 year old forward was signed to a two year deal worth $4.5M per year.

Vadim is a highly skilled playmaker who has had an impressive career in the Kontinental Hockey League. He has won two KHL championships, has been among the league leaders in scoring the last two seasons and has enjoyed success at the international level for Team Russia. We believe he can be an impact player in the NHL. -George McPhee in Press Release 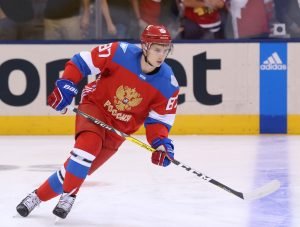 Shipachyov has been in the KHL since 2011 and his team has reached the playoffs in each of his seven seasons. His production did not drop in postseason play in Russia at all. In fact, in 107 playoff games, he scored 33 goals and had 97 points.

At the international level, he has played Team Russia on three previous occasions at the IIHF World Championships during the 2014, 2015 and 2016 tournaments. He won a gold medal in 2014, silver in 2015 and bronze in 2016 where he led the entire tournament in scoring and assists with 18 points on six goals and 12 assists. He also played for Russia during the recent 2016 World Cup of Hockey in Toronto. -Press Release

According to Eric Engles, the Montreal Canadiens were interested in Shipachyov last season, but a clause in his contract kept him in the KHL.

This is the first major contract the Golden Knights have handed out, and they clearly expect him to be on the ice at T-Mobile in October. For reference, other players making $4.5M per year include T.J. Oshie, Mats Zuccarello, Adam Henrique, Nick Leddy, and Antti Niemi.

EliteProspects.com’s breakdown of Shipachyov say he “isn’t overly efficient in physical battles,” not exactly what coach Gerard Gallant is looking for. He does however fit the McPhee build of a fast and highly skilled player who can score.

Shipachyov is currently with Team Russia for the upcoming World Hockey Championships in France and Germany. Last year, he led the tournament in scoring with six goals and 18 points in 10 games. –Mike Halford, NBCSports.com

Vadim Shipachyov only shoots if he knows it will be a goal
Definition of playmaking center. Generates shots at 4L level but scores at elite pic.twitter.com/ZDQ9O1vCDe

The New Golden Knight Is No Joke; Shippy’s Got Star Written All Over Him