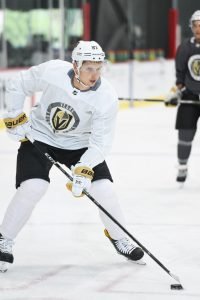 It’s ok. Calm down. Shippy will be in Dallas with the Golden Knights. (Photo Credit: SinBin.vegas Photographer Brandon Andreasen)

The deadline to cut the roster down to 23 was today at 2PM PST, however, as you will notice by some of the names omitted, one in particular, it’s safe to assume this will not be the 23 players boarding the plane to Dallas. So, here’s what was submitted to the league today.

Before you go throwing a fit, yes, Vadim Shipachyov is not on the roster… right now. Shipachyov is one of three players who remained in Golden Knights training camp with waiver exempt status. Therefore, he is officially being assigned to Chicago without any risk of the Golden Knights surrendering him to another team.

However, we can confidently say (like, beyond a shadow of a doubt) a move or moves are coming in the next two days that will free up a roster spot. This will allow George McPhee and the Golden Knights to bring Shipachyov “back” from the AHL before the game on Friday in Dallas.

The same case can be made for Alex Tuch and/or Shea Theodore. Both are waiver exempt, so moving them to the AHL (temporarily, maybe) does not put the Golden Knights at risk of losing a player to waivers. The expected move which will free up a roster spot for Shipachyov may open up an extra spot or two for Theodore and/or Tuch. Or, of course, Theodore and/or Tuch may start in the AHL due to the sheer numbers of NHL contracts the Golden Knights carry, as we’ve been hinting was possible since the Expansion Draft.

The other glaring factor with the roster as it stands is with the positional breakdown. This roster has 11 forwards, nine defensemen, and three goalies. This is absolutely NOT the breakdown the Golden Knights will bring to Dallas. McPhee has mentioned multiple times before that he expects to roster eight defensemen, which would likely mean 13 forwards and two goalies. The numbers could shift to 12/8/3 if he opts to keep three goalies, but that is also unlikely.

So, the deadline has passed, we have our final 23, but the waiting game continues as this 23 is far from final. Shippy will be “back”, and a trade (or at least some sort of move) is coming.

MORE: As we continue to unpack this, people have been asking what exactly we at SinBin.vegas expect to happen. The answer is simple, we do not know, however our guess is that there will be a trade of at least one defenseman and possibly a goalie on Wednesday or Thursday. Assuming another waiver claim is not made by the Golden Knights, or a forward is added via trade, Tuch will likely be on the opening night roster… until Neal returns.

This does not mean we are fully sticking to the prediction that Theodore will start the season in Chicago. The ability to make the roster compliant on Tuesday and not have a game until Friday gives the Golden Knights a bit more flexibility with waivers. Rather than waive a player now at the deadline, McPhee can now wait until 24 teams have already played their first game. (Vegas does not play until Friday, day three of the NHL regular season) Waiver claims are very rare after a team has played a game, which means McPhee has a better chance of squeezing Reinhart, Sbisa, Hunt, or someone else through waivers without losing him for nothing. Thus allowing him to “recall” Theodore from the AHL.