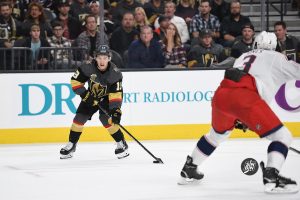 Leipsic was missing the one thing forwards need to be able to do, score. Would have liked to see what he looked like with one more offseason after playing a full year, but you can't fault McPhee for cashing in while there was value there. Doubt we see Holm this year.

The Leipsic deal also shows McPhee's confidence in Tomas Hyka. Very similar player to Leipsic and with what he showed through three games, George must have felt comfortable enough with him to move on from Leipsic.

Philip Holm currently makes $925,000 and is waiver exempt. He is an RFA with arbitration rights this offseason. Thus, the Golden Knights maintain his rights for at least one more year beyond this one.