Tonight is Game 3 of the Western Conference Finals between the Winnipeg Jets and the Vegas Golden Knights. It will be the first home game of the series for the Golden Knights and the first home game since they won Game 5 of the 2nd round against the Sharks on May 4th. The series is 1-1 and in tied series the winner of Game 3 going on to win about 70% of best of seven series.

Add it all up and you have no choice but to come to the conclusion that this is the biggest game in the history of the franchise and the biggest game for just about every single player on the roster. Yet, morning skate and the locker room after looked as if it was just another day at the office.

That’s the coolest thing about our group. Our guys just feel like it’s another game. We’re just having fun. We’re the same way at the rink, same way in the locker room, meetings are the same. (We) keep the pressure on the outside of the room, that’s kind of the way we’ve been handling things all year. Guys are still giving each other crap before games, it’s the same banter as usual, and it’s helping our guys calm down before games. -Nate Schmidt

If I didn’t know better, I wouldn’t have been able to tell you if this was Game 47 against Columbus or a pivotal Game 3 of the Western Conference Finals.

We had a lot more pressure on our team (in Washington) to win, so yeah it’s a different feeling for sure. -Schmidt

I feel differently about this group. We’re such a tight-knit group. It’s just fun to come to the rink and battle with these guys. -Shea Theodore

It’s important to stay the course no matter what, that’s how we got here. -David Perron 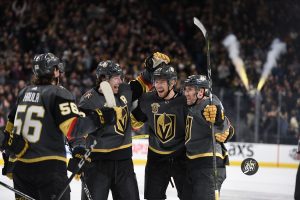 Smile, laugh, joke, who cares? It’s not like Game 3 of the Western Conference Finals is in your home building tonight. (Photo Credit: SinBin.vegas Photographer Brandon Andreasen)

Those are three players who were in the 2nd Round or further last season and they all agree this team is different.

They are different because everything remains the same. The same guys stepped on the ice first to start morning skate. They maintained the same tradition of putting the players with the closest connection to the night’s opponent in the center of the stretching circle (Reaves and Eakin got the nod tonight both being from Winnipeg). They ran the same drills. They stayed on the ice for the same amount of time as they always do, and then they went to the locker room and it had the exact same feel it’s had every single game throughout this inaugural season.

I don’t want to change things. Business as usual. Let’s go play the game, let’s work hard, let’s have fun. Hey, it’s another big game, but everybody knows where we are at. I don’t have to tell them every day that this is an important game. -Gerard Gallant

I’m sure I don’t have to remind readers of this site, but I’m going to do it anyway. 11 months ago this team had one player, 18 months ago they didn’t have a name, and 23 months ago the franchise didn’t even exist.

Now, they use the term “business as usual” on the morning of Game 3 of the Western Conference Finals.

It’s everybody. It’s huge when you have that atmosphere around your team. -Schmidt

Every person in the organization is seven wins away from achieving the goal they all signed up to attempt to achieve. There should be nerves. There should be massive amounts of pressure. Heck, it should be hard to sleep in anticipation of what’s to come next. But instead, we get this…

I’ll wake up, grab my Coke Zero, and away we go. (wink) -Gallant

I picked on him for holding a can of soda like he was a model for a commercial during a press conference early in the season. Months ago, back when the games had little meaning and there were only five of us in the room interviewing him. Yet he chooses today, the day he’ll coach the biggest game of his life, in a room of about 50 media members, to continue our running joke because that’s what he’s done all year.

That’s what the Golden Knights have done all year. At every pass people have expected things to change for them, yet they just keep on keeping on because they know if they stay themselves, the results will remain as well. The only thing that will be different is people will finally run out ways to doubt them, and even then, the Golden Knights will probably remain the same.