They’ll call the Golden Knights opportunistic. They say Vegas capitalizes on others mistakes, and they’ll throw out quotes like this…

We win that game nine times out of 10. Tonight was the one. -Blake Wheeler, Jets captain

Those terms don’t resonate for the Golden Knights though because they don’t believe dumb luck is what’s making it happen.

Sometimes you create your own bounces. -Pierre-Edouard Bellemare

You go do what you can on your shift, and you rely on the next guy to go do his job on his shift, and hopefully that wear and tear will eventually push them into making a play they don’t want to make. Nate Schmidt 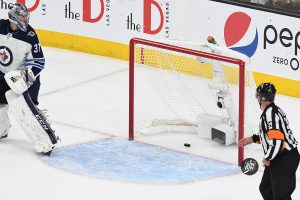 This is a look many goaltenders have had at T-Mobile Arena. It’s a look of confusion, but it shouldn’t be.  (Photo Credit: SinBin.vegas Photographer Brandon Andreasen)

Vegas is tenacious on the forecheck, they hound teams in the neutral zone, they transition from defense to offense faster than any team in the NHL, they roll four dangerous lines and three solid d-pairings, and they have high-end talent that finish the chances when they come.

This isn’t a mirage, this is a darn good hockey team and it doesn’t take much to end up on the wrong side of the result when teams play against them.

Most people will call the mishaps of the Jets, Sharks, and Kings mistakes, but it’s probably best to call them something else. “Forced errors” is the term that popped into my head, but if you’ve got a better one let me hear it. No matter what we call them though, the Golden Knights are the best in the league at creating them.

Whether it’s been Kyle Connor or Mark Sheifele not getting the puck through the neutral zone, Ben Chariot giving his goalie no option to play the puck, Connor Hellebuyck spilling a glove save, or Dustin Byfuglien whiffing on a shot at the blue line, the Golden Knights relentless pressure causes each error.

All it takes is the slightest mistake, and the Golden Knights are triggering the goal horn, turning on those smoke-thrower things over the boards, and cueing up Vegas Lights. They’ve been doing it all year, especially at T-Mobile Arena, and teams continue to make the walk back to the visiting locker room with a look of bewilderment and are left scanning the heavens for an explanation.

The stars are aligning for them, but it’s not going to stay that way. -Connor Hellebuyck, Jets goalie 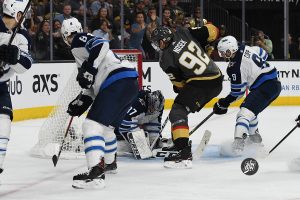 While it may feel cosmically motivated or incomprehensible at first, what Vegas does is really quite simple. The Golden Knights force their opponent to mess up, and then when they do, they have guys like Marchessault, Karlsson, Smith, Neal, Tuch, Perron, and even Tomas Nosek to make the chances count.

Opportunistic, unimaginable, baffling, enigmatic, mystifying, or whatever other words the thesaurus spits out, it’s easiest to just call them good.