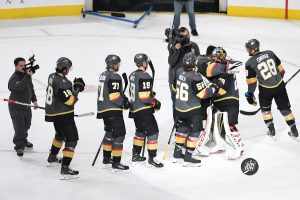 That’s right, with wins over Edmonton and Calgary, the Golden Knights would complete a regular season tied for the 33rd best in NHL history and be better than the best season in the franchise histories of up to 11 teams. Those include the six mentioned above plus Calgary, Chicago, New Jersey, Tampa Bay* and Winnipeg*.

Chicago’s best season ever was 112 points in 2009-10 when they won their first of three recent Stanley Cups. Toronto’s best regular season was in 2003-04 when they finished with 103 points. The Leafs currently sit at that same 103 number with two games to go, but they cannot reach the Golden Knights. Thus, it took the Golden Knights less than one regular season to have more points than one Original 6 team has ever had and with a pair of wins in the final games, they’ll cross a second off the list of six as well.

Now, of course, the Golden Knights are playing in a season in which there are 82 games, shootout wins, and overtime losses which weren’t the case for a majority of the 100 year history of the NHL. However, if you simply take points percentage which eliminates the difference between an 80 (or fewer) game season and the 82 game season, the Golden Knights will still at worst rank among the top 121 seasons in history. 110 points would be good for 104th, 111 for 95th, 112 for 83rd, and 113 for  66th.