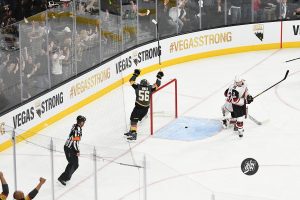 Inspired by the beauties by David Perron and James Neal over the past two games we’ve decided there’s no better time than now to take a look back on the Golden Knights “Goals of the Year.”

These are separated into two groups, first are the most important goals. These are based on a few criteria but mainly the impact the goal had on the Golden Knights season. The second group are the prettiest goals, graded mostly by skill and difficulty. Time of goal, score, and impact on the game are not considered for these goals.

File this one in the “these guys are for real” category. After playing a great game the Golden Knights found themselves down a goal with the clock ticking down. They had chance after chance with the goalie pulled but just couldn’t beat Pekka Rinne. Then, off the magical 3rd period stick of Erik Haula the Golden Knights had their equalizer and eventually won the game in OT. It was a statement to the Predators, a statement to the NHL.

This goal gave the Golden Knights their 6th win of the year, but more importantly it was the first win against a truly excellent opponent. Vegas was down to their third goalie after Fleury was hurt in game four and Subban earlier in this game, and yet still they found a way to get it done. Also, this goal might have been the birth of the madness that is the home crowd at T-Mobile Arena. The place was an absolute zoo and it was the first of many times the aisles would be filled with losing fans filing out with their tails between their legs. Oh, and it’s also William Karlsson’s first as a Golden Knight, the flood gates haven’t closed since.


The Golden Knights playing the second game in franchise history had dominated the majority of the hockey game, however they just couldn’t get one past Antti Raanta. With Fleury on the bench, Nate Schmidt was able to pinch down and tie the game giving the Golden Knights at least their third point in the first two games. James Neal would eventually tally number four with the game winner in OT. Losing this game in regulation would have been demoralizing, instead they won it with two heroic goals. The belief that the Golden Knights are never out of a game started with this goal, and it’s continued all year.


This game just had that feel of one that meant more than any other game on the year. The ultimate measuring stick, the team with the best record in the NHL, came into T-Mobile Arena, took a 2-0 lead, and still the Golden Knights found a way. Add in the fact that it happened with 2.3 seconds left on the clock, and we’ve got a goal that would be the goal of the year for any other team… but not for the Vegas Golden Knights.

What happens if they lose this game? The Golden Knights were outplayed, outshot, outhit, out-everythinged in this game, but James Neal was not going to let that stop him or his new team from starting out the season right. They had absolutely no business winning this game and it felt like a fluke. We sooned learned, the fluke was them being outplayed, not the result. This goal set a tone in the locker room that hasn’t changed since, and it’t scary to think what the tone would have been without this one and Neal’s other goal that night.

It’s kind of cheating because it occured in a shootout, but this goal is just so gorgeous that it had to be on this list.

Two words: Toe. Drag. An absolute beauty of a goal. Not the only time he’s done this either.

It didn’t go down as a shorthanded goal as the Golden Knights went to full strength about a second before he scored it, but the effort to score this goal was tremendous. A long review followed but Lindberg was ruled onside and the goal counted.

Maybe a bit of recency bias creeping in here, but the chip, the snipe, the timing, everything, just beautiful. It also went down as Neal’s 20th of the season, something he’s done for an incredible 10 straight years.

As if there was any doubt. This goal should be in the running for goal of the year in the entire NHL. He dangles it through two defenseman after pulling it off the boards and then slips it 5-hole to finish the deal. Just straight filth.