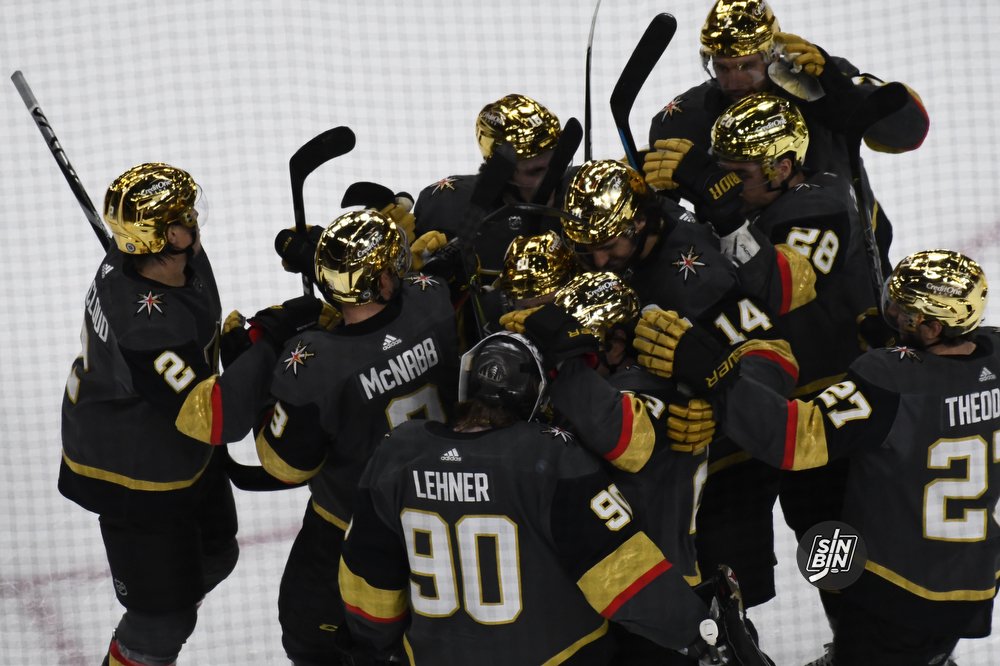 Our week of hypothetical managing rolls on. Today, it’s my (Jason) turn to play GM for a Day, and we’re going a little calmer than Ken’s plan.

I have no choice, I’m going for it now. There was an order given six seasons ago and I agreed to it. So, it’s time to deliver.

Vegas’ current roster has enough talent up and down the lineup but it hasn’t fully succeeded. However, under the right conditions, the Golden Knights can defeat almost every team on any given night. Sure, changes will be made but for the most part, I’m going to use what I already have.

TRADE – Alec Martinez traded to the Detroit Red Wings for a 2022 4th round pick.

On Tuesday I predicted the Golden Knights front office would aggressively try and unload Alec Martinez’s contract. It’s rare, but I’m in agreement with VGK’s FO. Detroit is a team that’s maturing, has cap room, and could use some veteran leadership. As the Golden Knights have done in the past with Brad Hunt, sending Martinez to Detroit would be looking out for the player as well. It’ll hurt to some capacity to lose the almost 35-year-old but Vegas opens cap space and replenishes a 4th round pick. It’s not ideal but I’d rather shed defense in order to keep my offense intact. My only fear is the Red Wings management asking for a sweetener.

Look, I’m not a miracle worker but my task is to win the Stanley Cup this year, not in 2028. With that in mind, immediately after trading Martinez I’m picking up the phone and reassuring Max Pacioretty he’s not going anywhere. It’s time for a heart-to-heart. Like Brad Pitt said to the actor playing David Justice in the movie Moneyball, “I want to milk the last ounce of baseball you got in you.” The same goes for Pacioretty. He’s on an expiring contract seeking another lucrative deal, and I need goals. I’m looking for 70+ games and 30+ goals from Pacioretty next season. In the end it could work out well for both parties.

It’ll be no secret, the pressure is on Pacioretty, Mark Stone, and yep, Jack Eichel. When a player signs a contract worth $10M annually he’s also agreeing to accept the pressure that comes along. I anticipate Eichel to play like a ten-million-dollar center this season and I expect him to get the most out of his teammates. He may not wear a C but this will be Eichel’s team. It’s just a matter of when. He wasn’t an original Misfit but The Creator’s demand of winning a Cup in six seasons applies to the top center as well. To keep the trio of Pacioretty, Mark Stone and Jack Eichel together, someone else will need to go.

Brossoit’s contract was another example of overspending on an unnecessary need. Vegas had Robin Lehner’s backup already yet overpaid for an underwhelming, established goalie. The Golden Knights didn’t get enough from Brossoit last season to continue to carry his salary. Since 2020, the Golden Knights have severely overpaid their goaltenders and last offseason the club was forced to sell off a Vezina winner for nothing. I’m going to follow suit by shipping out Brossoit, and like Vegas’ front office I’m not concerned with the return.

I’ve successfully managed to get underneath the cap without tearing apart the team. Now, it’s time to examine what I have left on the books.

By trading Martinez I can now focus on securing Nic Hague for an equally beneficial deal. New coach Bruce Cassidy shouldn’t be forced to deal with one of his everyday defenseman holding out. What happens if the holdout continues past Thanksgiving? It’s not ideal. So, I am willing to offer Hague a comparable AAV with some of his peers. Hague’s agent will ask for what Henri Jokiharju received last summer from Buffalo. Both were drafted in 2017, have played over 140 games, and totaled 40+ points. However, Jokiharju has a bigger role and plays for a team with cap space. Hague will happily take my offer.

Roy has earned a multi-year deal and I’m willing to work with him but I’m not ready to break the bank. St. Louis pays Ivan Barbashev $2.25M a season and he’s had much more success. Barbashev registered 60 points last season and averaged 16 minutes. Roy skated 16 minutes per game as well but had 21 less points. I’m willing to sign the 25-year-old for multiple years but under $3M AAV.

Kolesar has earned a raise but if I’m still paying William Carrier it won’t be much.

SIGNED TO A PTO – Ryan Dzingel

I expect the Golden Knights front office will invite a player or two to training camp without a contract. I suggested Ryan Dzingel on Tuesday and I’m sticking with it. Low-risk and an enormous reward if Dzingel can ever find his way again.

My hands are truly tied so there’s not much turnover from last season. If the key players stay healthy fans should expect a playoff berth. However, it’s not a Stanley Cup-winning roster. Colorado isn’t going anywhere and I can’t compare the two organizations. To be honest, I’d be willing to listen to offers on most Golden Knights players if it gets me closer to the Avalanche. If other GMs are asking about William Karlsson or even Shea Theodore, I’ll take the call. Heck, I would consider moving Robin Lehner if Cassidy has full confidence in Thompson.

It doesn’t look much different from last year’s roster but here’s what my lineup will look like come October. Keep in mind the plan is to add a player or two at the trade deadline using the inevitable LTIR space.

What it really comes down to is the need to correct some of the organization’s past mistakes. I’m forced to work with oft-injured players and long-term commitments. I’ll try and fix or tweak this summer but I can’t keep kicking the can down the road. Lost draft picks, selling off assets, and juggling the cap haven’t worked.