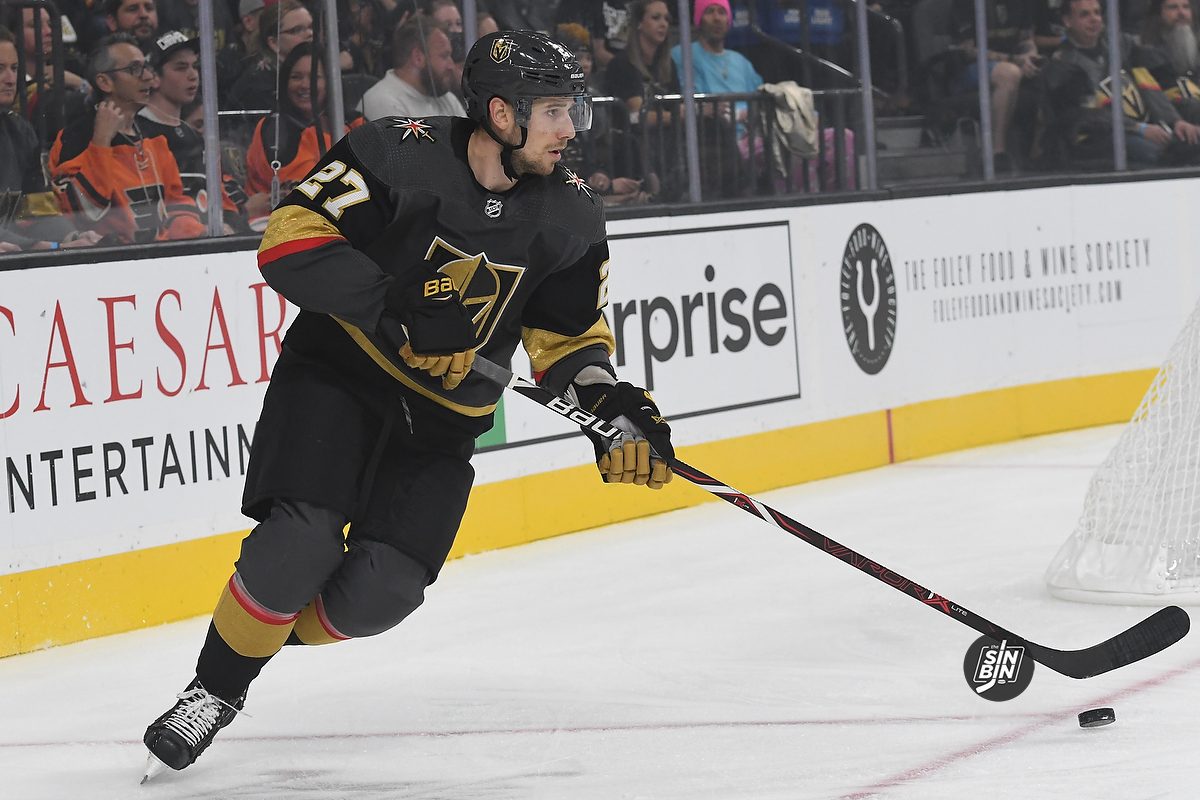 Get to it and get it out. That’s how VGK wants to play in their own end, and they know they haven’t done enough of it. (Photo Credit: SinBin.vegas Photographer Brandon Andreasen)

Hockey is a funny game. One night a team can come out completely flat, give up seven unanswered goals, and get embarrassed and then a few nights later that very same team can play an excellent defensive game and grind out an overtime win. The difference between the Golden Knights Monday night performance and their Wednesday night performance were stark.

Nevermind what we can do to get up ice, nevermind the plays that we can make, be simple and just give the (opposing) forwards a steady diet of right ups, and quick ins and tip ins and let them go to work. -Nate Schmidt

Schmidt got a little inside hockey on us there, but what he’s talking about is moving the puck quickly out of the zone. Rather than sitting back and trying to make the perfect play to spring an offensive chance, the defensemen wanted to simply get the puck out of their own zone as quickly as physically possible. Either move it directly out or move it once to the D-partner and let him move it out.

If you watch the game again, especially the 2nd period, the Golden Knights do a wonderful job of following this plan. The first seven times the puck was in the Vegas zone, defensemen exited within 10 seconds. It helped earn the Golden Knights a penalty and eventually the game-tying goal, and it continued throughout the remainder of the period it the rest of the game.

It sucks when teams do it to us, so why not simplify it and do it to them. That was kind of our idea and I thought we were much more successful with it. That’s the game that we want to play and it’s the game we’ve always wanted to play and we got away from it a little bit and I think this will help us get it back -Schmidt

This particular concept has really come and gone from the Golden Knights blue line this season. It was a staple it what Vegas did a year ago and it’s why they were so successful in transition in the inaugural season.

Tonight is another game against the Flames, a team that throttled the Golden Knights just four nights ago. The commitment to the simple, quick, get the damn puck out of our zone right now, style of hockey Vegas displayed in Arizona must return to T-Mobile Arena tonight. It sounds obvious, but it’s really not. It takes skating skills, quick decision making, and a group of defensemen all on the same page.

Simple isn’t really simple, but it is effective, and the Golden Knights have the group of players to do it. They just have to keep doing it a lot more consistently than they have thus far this year, and that starts with a payback game against Calgary.