Despite the fact that there won’t be an official “knighting” ceremony, former Panthers head coach Gerard Gallant is now Sir Gallant, the first head coach in Vegas Golden Knights history.

There is a great deal of excitement in the hockey community regarding what is happening with the Golden Knights and I am glad to now be a part of the team. We have a state-of-the-art practice facility being constructed, a world class home arena and from what I’ve heard, a very passionate and engaged fan base. I look forward to seeing that enthusiasm first hand and will work with George and the rest of the hockey operations staff to ice a team that Golden Knights fans will be proud to support. -Gallant in Golden Knights Press Release

Gallant was fired just 22 games into the season with the Florida Panthers with the reason cited as “philosophical differences.” Most believed it was due to disagreements over the use of analytics in deciding ice time and playing style, but Gallant denied that a few weeks after being let go.

Prior to his gig with the Panthers, Gallant spent four years as the head coach of the Columbus Blue Jackets. That was widely considered an unsuccessful tenure, which led Gerard to take a job QMJHL with the Saint John Sea Dogs. Gallant led the Sea Dogs to back to back titles and went on to win the Memorial Cup as well in 2011. This renaissance thrust Gallant back on to the scene.

One of the key players on his Memorial Cup winning team was a big reason why Gallant found himself standing behind an NHL bench once again. The Panthers selected Jonathan Huberdeau with the 3rd overall pick in 2011. Gallant was instrumental in getting Huberdeau that far, and then was able to reunite with him in the NHL in 2014.

The saga surrounding Gallant’s release in Florida made international headlines, as did these two pictures (1 and 2). Following a loss to the Carolina Hurricanes in Raleigh, Gallant was fired and left to take a taxi with assistant coach Mike Kelly (remember that name) who was released as well. But the oddity doesn’t end there. Normally when coaches are fired following an NHL game, it’s done immediately following the game and the media never gets a chance to speak to the coach. Well that was not the case with Gallant. However, no local media traveled from Miami to this particular game in North Carolina, so the Panthers allowed Gallant to speak to a few AP writers before making him aware of his release. The whole story is broken down in this excellent article from CaneCountry.com. It says a lot about the state of the Florida Panthers organization, but also about what kind of person the Golden Knights just hired.

As to the man George McPhee selected to become the head coach, he’s described as fiery, gritty, intense, but always a players coach.

He’s so approachable. You’re in junior, you’re young, you have problems, and he’s just so easy to talk to. He’s always there for you. You can call him any time of the night. He’s just a good, old East Coast (Canada) boy. He’s down to earth and he’s got a big heart. Very fortunate that I got to cross paths with him. –Nathan Beaulieu, Montreal Canadien, played for Gallant in QMJHL

For us, our practices were nice and short and hard and that’s what you want as a player. He gave you some guidelines to play around. He didn’t have too many highs, too many lows. It’s nice to come to the rink and be even-keel, today’s a new day and you keep going forward. We had some success there with him, and that’s the biggest part that’s surprising right now. –Brian Campbell, Chicago Blackhawk, played for Gallant in Florida

He’s one of the best guys I’ve ever met in hockey. Everybody speaks so highly of him. He’s still a guy that you hear his name getting mentioned in this room very often. We miss him a lot because we really enjoyed being around him. He’s one of the good guys that you’re really genuinely happy for to have such great success. We just don’t want it to be against us. –Max Pacioretty, Montreal Canadien Captain while Gallant was assistant

And those are just three examples. Any time there’s a quote from a player talking about Gallant, they speak glowingly. Also, our friends in the media who have covered Gallant cannot say enough about the man as well.

Probably his strongest coaching skill, and likely the reason he was named head coach in Vegas, is his ability to teach young players. During his short stint in Saint John, Gallant was able to groom multiple players on to NHL rosters. Aside from Beaulieu and Huberdeau, he also coached Tomas Jurco, Mike Hoffman, Simon Despres, Eric Gelinas, Yann Sauve, and Charlie Coyle, all in just three years while with the Sea Dogs.

Remember the name Mike Kelly? You should, cause I told you to remember it 480 words ago in this article. Kelly has been an assistant coach with Gallant for the past seven years spanning over two organizations in multiple leagues. He was released the same day as Gallant in Florida and can be expected to join him here in Vegas.

Gerard Gallant will be officially introduced to the media today at noon at T-Mobile Arena. Gallant will be joined by GM George McPhee and The Creator. We’ll be live tweeting quotes from that presser and will have much more on Gallant on the site in the coming days. 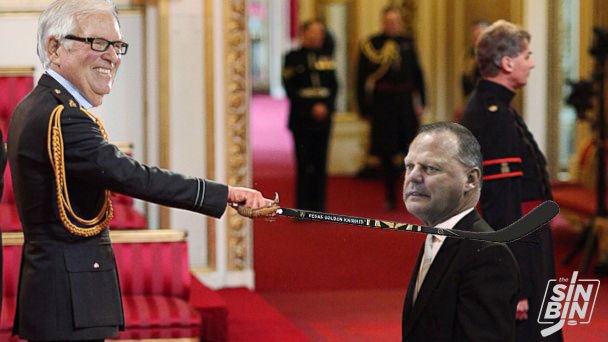