George McPhee On Vadim Shipachyov: “We’re Trying To Be Patient”

The Vadim Shipachyov saga rolled on today and while we now have the ability to still offer some clarity, it’s still a confusing one, to say the least. 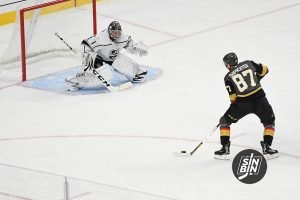 This rink is so small, should I shoot or pass? (Photo Credit: SinBin.vegas Photographer Brandon Andreasen)

Tuesday, Shipachyov was reassigned to the Chicago Wolves of the AHL to make room for the return of Jonathan Marchessault. Wednesday night a group of national media tweets made waves as Shipachyov’s agent had reportedly been “granted permission to seek a trade.” Then came today, when Gerard Gallant ducked three Shipachyov questions in his daily press conference heeding to a normal answer of “you’re going to have to ask George.” McPhee was not made available to local media but did appear on the Toronto’s TSN 1050 OverDrive.

It hasn’t worked out yet, it may, it’s just taken him a little bit longer to assimilate, to adjust to the North American way of playing. It’s a smaller rink, it’s a faster game, and his pace of play hasn’t picked up yet. We’re trying to be patient.

Unfortunately, we have a lot of players here, and we have certain people that have really blossomed and are playing extremely well right now, and they deserve to be in the lineup.

And so we said to people all along it doesn’t matter your draft position, or how much money you make, or where you came from, the guys who that are working their guts out and playing well are going to play. It’s done on merit and nothing else.

We are in a bit of a jam here in terms of the number of people we have. So (I) decided I could assign him without putting him on waivers. We’ve done that to give us some breathing room for a little bit here.

He hasn’t reported yet but he may. His agent asked if I mind if he talk to some other teams, I said I don’t mind, so that’s where we are. -George McPhee

Starting at the beginning, this is a drastic change from what McPhee said during his last press conference with local media on October 9th, following a pair of road games in which Shipachyov did not play. At that point, he called it a numbers decision.

As you know we had three guys who we could assign, and we did, to give us the room that we needed to carry what we are carrying. I do not have a specific date when that will change but we are working on things. -McPhee on 10/9/17

Now, he’s saying something quite different, that Shipachyov has not assimilated to the North American game, and that based on merit he’s been reassigned to the AHL.

The Golden Knights do appear as though they would prefer Shipachyov goes to Chicago and plays in AHL games until the Golden Knights choose to bring him back. However, at the time of the interview, which was during a 1-4PM PST radio show, Shipachyov had not yet reported to the Wolves. (Note: If he does not report, he will likely be suspended without pay.)

As for his agent, McPhee confirmed he did indeed grant Petr Svoboda, Shipachyov’s agent, permission to speak to other teams. Of course, any deal that Svoboda finds for Shipachyov must be agreed upon by McPhee.

Here is the statement that may be the most interesting among the entire quote. “We have a lot of players here, and we have certain people that have really blossomed and are playing extremely well right now, and they deserve to be in the lineup” Is he referring directly to Alex Tuch or is this a comment about many non-waiver exempt players? Has Shipachyov even been outplayed by Griffin Reinhart, who has been a healthy scratch all eight games? And most importantly, when Erik Haula returns (which we believe will be for Friday’s game) will it still be “done on merit and nothing else” as McPhee suggested with Shipachyov?

This story is going to continue to be an intriguing one and it seems as though McPhee’s and Gallant’s quotes will not clear it up completely. However, actions speak louder than words, and the actions of Shipachyov (does he report?), McPhee (what does he do when Haula returns) and Gallant (managing ice time) will continue to tell the real story.

And you thought it was all roses being 7-1… think again.