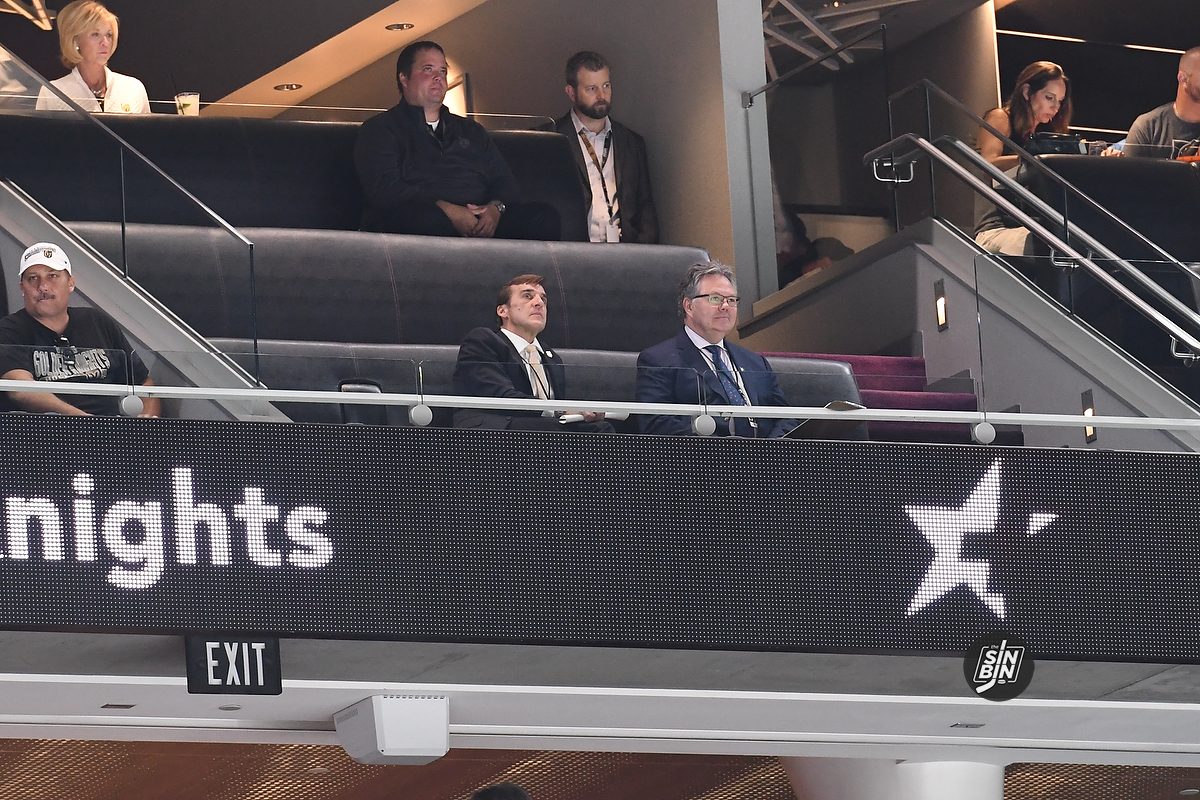 How has he never realized this!?! The guy lives in an ice rink! (Photo Credit: SinBin.vegas Photographer Brandon Andreasen)

If you thought you drank too much coffee, then you’ll enjoy this great anecdote from NBC Sports’ Pierre McGuire. The ‘Between the Benches’ analyst joked about bumping into a fully caffeinated George McPhee at an early Vegas practice in Washington.

You know you’re supposed to go to the rink everyday and learn something new. So, I came to the rink today in Washington and I’m sitting there and it’s dark and I’m by myself. Then all of a sudden this really in shape 60-year-old man sits next to me, George McPhee. Maybe, one of the best dressed general managers in the league, and obviously one of the toughest. He was a nasty piece of business. –Pierre McGuire on TSN 690 Montréal

When an award-winning GM and a high-profile hockey personality are casually sitting together, you’d think they’d be talking about something important. You know, like VGK’s PP deficiencies or highly rated prospects like Erik Brannstrom. Nope, the two spent time together talking about what was in McPhee’s cup.

So he says to me, ‘See what I’m drinking?’ I said no what are drinking George? He goes ‘I’m drinking coffee. In all my years in the league I didn’t start drinking coffee until this year… I feel that it helps my workload.’ I’m not kidding you. I was stunned. -McGuire

Everyday jamokes like me, can’t function without a hot cup of joe, and with all of the pressure being an NHL general manager brings, McGuire was floored by McPhee’s newest (off the ice) discovery.

At sixty! At sixty he just started drinking coffee. -McGuire

TSN Montreal Host Mitch Melnick facetiously asked McGuire if the slow start to the Golden Knights season was creating stress for their GM.

No. He said that he drinks three cups a day, and he feels it gives him that little extra jolt in the afternoon to keep him rocking. I believe him. -McGuire

Both continued to laugh in shock that McPhee picked up coffee so late in life. Especially for a man that works in and played the sport of hockey. We see it on tv, most players walk past the runway cam holding grande or venti lattes. In all sports, coffee has been that go to for a quick punch of energy.

He was drinking water, fruit juice, but he never drank coffee. I was stupefied. -McGuire

Surprise! Athletes and sports executives are just like us. Next flat white is on us, George.