Among the 18,188 in attendance Tuesday night at T-Mobile Arena for the Golden Knights-Nashville game was the general manager of the Seattle NHL franchise.

I assume Ron Francis was taking careful notes, both from what he was watching on the ice and what he was seeing inside The Fortress.

He would be wise to do both.

Also in attendance Tuesday, and nearly as conspicuous, was the NHL commissioner.

Yes, Gary Bettman was in the house and he kept a low profile, lest he get the crap booed out of him by the Medieval Maniacs who may never forgive him for the performance of his officials in Game 7 of the opening round of the Stanley Cup Playoffs last April.

Do Knights fans have long memories? Hell yes they do. 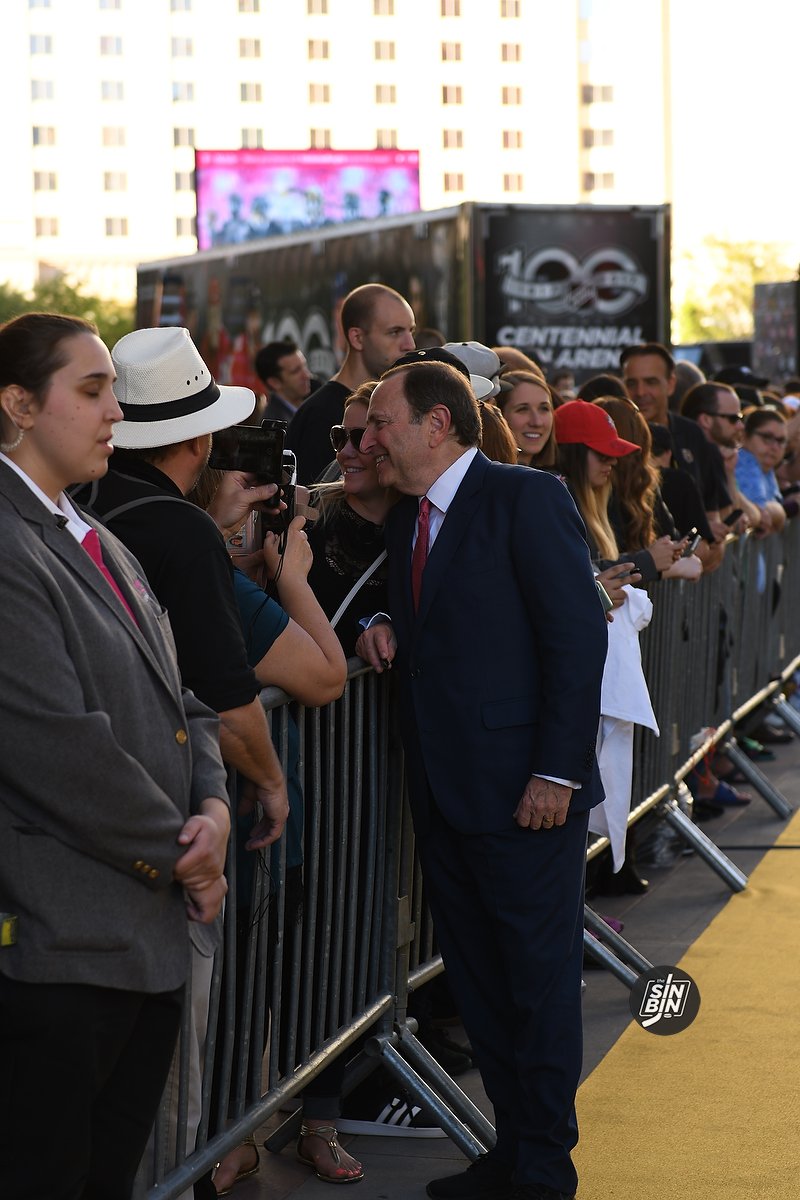 What was Bettman doing in Las Vegas? He was a speaker at a symposium on sports betting at the Global Gaming Expo Wednesday morning at the Sands Expo and Convention Center. He was in good spirits and rightly so, given nobody booed him and no one asked him about officiating or concussions and CTE.

He was asked about the success of the Golden Knights and what it has meant for the NHL in the team’s brief existence. He was quick with his responses, praising Bill Foley for the job he and his organization have done (Sorry Ken, Bettman did not refer to Foley as “The Creator”).

I asked him if Francis should be paying close attention to what goes on here at T-Mobile.

Seattle is its own market. I think the experience inside T-Mobile Arena is consciousness-raising. But we all know what works in Las Vegas doesn’t necessarily work elsewhere. Seattle is going to have the same opportunities in the Expansion Draft and everything is on schedule and we expect Seattle will be another fantastic NHL experience. -Bettman

For Bettman and the NHL, the growth of sports betting throughout the U.S. is an opportunity to help develop new fans and give existing hockey fans more options to connect to the game. It’s a far cry from 20 years ago when then-Mayor Oscar Goodman paid Bettman a visit in his mid-Manhattan office in an attempt to secure a franchise for Las Vegas and got the cold shoulder.

But timing is everything. The building of a first-class arena, the growth of the area’s population and rising media market and an owner who was willing to put up half a billion bucks all helped change Bettman’s mind. He became an advocate for Las Vegas and had he not backed Foley’s bid, Las Vegas might’ve been Quebec City on the outside looking in.

Of course, Bettman looks pretty smart given the Knights’ success, both on and off the ice. Every other day, it seems team president Kerry Buboltz is announcing another sponsorship or joint venture that ties in with the Knights.

So given how hot the Knights are, Bettman was asked about the team participating in an outdoor game in the near future. He was asked his thoughts about playing in Allegiant Stadium, the Raiders’ soon-to-be new home.

I think they have a fixed roof, right? So that’s not an outdoor stadium, is it? That’s a big stadium. It’s like a bigger arena. -Bettman

Someone asked him about playing in Michie Stadium at West Point. Obviously, Foley’s ties to having attended and graduated there seemingly make it a natural fit. I’ve been espousing that since Day One.

Bettman said he and Foley talked Tuesday about the Knights participating in an outdoor game. He also said West Point might not be an option for technical reasons.

We’ve had our eyes on West Point for a number of years. There could be refrigeration issues at Michie Stadium. You have to have plumbing that works, Michie Stadium has not been winterized. -Bettman

Refrigeration issues? He said this a half a mile from where the NHL played an outdoor game, in September, in heat close to 100 degrees, in the back of Caesars Palace. You’re telling me Dan Craig and his guys couldn’t make ice at Michie Stadium?

Just say Foley doesn’t want to give up a home date. But if they can make an outdoor rink in Vegas in September, they sure as hell can make ice in upstate New York in February. And without grasshoppers.

I think the Knights will play an outdoor game next year somewhere. It just won’t be in Vegas. But hey, you may be able to bet on them when the play the Capitals net year in D.C. at the William Hill Sportsbook at Capital One Arena.

With Gary Bettman, you do get progress. It just isn’t always the kind of progress you envisioned.