Anyone who has been anywhere in the Vegas valley over the past four months or so is well aware of the buzz this city has for the Golden Knights, but finally, there are numbers to back up how in love Las Vegas is for its hockey team.

Game 1 delivered an 11.1 local TV rating, the best for any game ever on NBCSN in Las Vegas. It also earned a 19 share, which means 19% of televisions that were turned on in Las Vegas were watching the Golden Knights and Sharks. 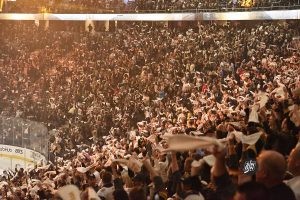 And this was a home game, so the 18,400+ at the game couldn’t be watching on TV. (Photo Credit: SinBin.vegas Photographer Brandon Andreasen)

All in all, a lot of people all over the country watched the Golden Knights destroy the Sharks, and a ridiculous amount watched from their homes in Las Vegas.

Now, on to tomorrow night, for Game 2, which will be the Golden Knights national TV debut on NBC at 5PM Pacific time. Expect the numbers for that one to be even better than they were in Game 1.