This was not the plan. 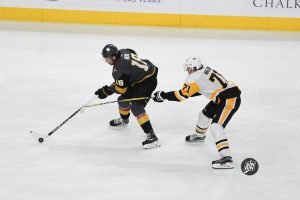 VGK might be able to name their price on James Neal, but is it worth the risk of never knowing what could have been? (Photo Credit: SinBin.vegas Photographer Brandon Andreasen)

When George McPhee, Kelly McCrimmon, and the Golden Knights front office built this team their minds were on the future. They had a mandate from the most powerful man in the organization to reach the playoffs by year three and win the Cup by year six. To do it, they accumulated picks, made moves to bring in young unestablished talent, and thought the host of pending free agents would be able to bring a haul similar to the post Expansion Draft trade returns.

Now the Golden Knights are winners, and their general manager has been on record time and time again saying he won’t “derail” the team’s success. But Vegas hasn’t exactly been in the business of giving away pieces for nothing. (Except for Shippy, but that’s a whole different story)

James Neal, Jonathan Marchessault, David Perron, and Luca Sbisa are all set to become unrestricted free agents when the season is over. The plan was to move at least a few of them to bring back even more future assets to the bushel of them Vegas has already compiled. However, this whole winning thing might just get in the way.

We like our team, we like the chemistry that they have, we like the lines and the pairings that have been put together. Are we going to make radical changes? I doubt that. We’ll just see where this goes. The focus is on trying to win and all the stuff we go through up here in the front office basically stays in the front office and people are going to show up to games and see our team and I hope they enjoy it. –George McPhee on Vegas Hockey Hotline

Here are the facts. Vegas has to figure out something to do with all of these players. Unless the team wins the Stanley Cup (and even then there’s still debate on this), letting high talent free agents walk for nothing is not good business for an NHL team. So, McPhee has one of two choices.

Where things have really changed is what Vegas might want back for the Neal’s, Perron’s, Marchessault’s, and Sbisa’s of the world. No longer do those 2020 picks look so valuable. Neither even at this point does a 2018 first. McPhee now has to shift his focus to the near future as he’s got a team much closer to winning than anyone expected. He’s really looking for the next Alex Tuch, but the next William Karlsson, Nate Schmidt, or Colin Miller would suffice. The belief now has to be that this team should be ready to become a dominant force by 2020.

Trading away a player like the guys mentioned above would put a damper on this season, but only if the return is not tangible. If James Neal is traded for the second coming of Alex Tuch or Shea Theodore, that’s not derailing the season at all. But if he’s moved for draft picks and/or future assets that aren’t yet ready to contribute at the NHL level, is it really worth the risk?

I say do what you have to do. That’s what we talked about when I got the job. We want to be in it for the long haul. Whatever decision they want to do, they are going to do and that’s fine with me. –Gerard Gallant on Hockey Central

Opinions vary from “they are definitely to selling,” to “they might they might not,” to TSN’s Insider Bob McKenzie saying “they certainly aren’t breaking up what’s a winning lineup.”

My opinion is somewhere in between. If a trade is there that can serve both makers, meaning they can bring in a young talented player who is ready to play now, they’ll do it, but if no one is willing to part with top NHL ready prospects, McPhee and Co. will hold on and make their moves after they see how far they can go.