Connor McDavid is fast, so fast that it feels like he has the ability to turn on the video game turbo button when no one else can. By my count, in two games against the Golden Knights, McDavid created nine scoring chances, including five directly in front of the net… on his own. Literally, no one else had to do anything but skate to the front of the goal, McDavid did the rest.

He’s ridiculously fast. We’ve got to manage our players. When they go out on the ice against him they’ve got to try and keep his speed away. Try and pick him up early, try and deny him the puck, but every coach says the same thing, it’s tough to do. -Gerard Gallant 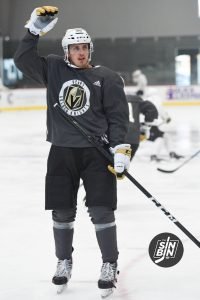 One of the biggest reasons stopping McDavid is such a challenge is the incredible amount of time he spends on the ice. In the last game at T-Mobile Arena, McDavid logged 25:22 of ice time. No Golden Knight forward crossed 22 minutes and Shea Theodore, a defenseman, led the team with 24:01, nearly a minute and half less than McDavid.

McDavid’s elite speed and skill have to be matched carefully, you can’t just throw anyone out there against him. All Star head coach Gerard Gallant loves to roll his four lines in order as often as possible, but against Edmonton and McDavid, that’s simply not possible.

He’s talking about Marchessault/Karlsson/Smith and probably Carpenter/Bellemare/Nosek (though Perron/Haula/Neal played more time against McDavid in the last game), and the defensive pairings of Schmidt/McNabb and Theodore/Engelland.

But here in lies the problem, and likely the reason the Golden Knights have struggled with the Oilers; Gallant admits that it doesn’t always work that way. In the OT victory on January 13th, McDavid’s line went scoreless against the Golden Knights top line, yet he was still on the ice for a pair of goals, the two even-strength goals Edmonton scored in the game. Marchessault, Karlsson, and Smith may shut him down, but that doesn’t mean he’s down and out of the game completely.

It’s a conundrum that every team in the league deals with when they play Edmonton. This year, most have solved the riddle. To this point the Golden Knights have not.

They’ve got another shot at it tonight, and if they do, they’ll become the first team in the Western Conference to reach 80 points, but as Turk implied, it’s easier said than done.