Three of the four major professional sports in North America have a salary cap. The reason the salary cap is used in leagues like the NHL is to keep parity as high as possible. It makes it challenging to keep all of the best players while helping to distribute them to the weaker teams in the process. 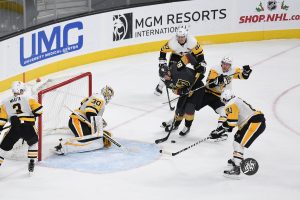 This may be hard to believe, but even with the superb talent the Golden Knights have put on the ice in 2017-18, with the three 1st round picks, and with the contract extensions for Jonathan Marchessault, Jon Merrill, and Deryk Engelland, George McPhee’s biggest asset from the Expansion Draft is still the salary cap.

The massive amount of cap space allows George McPhee and Co. easier decisions on James Neal, David Perron, and Luca Sbisa, opens the door to hand out big bucks to William Karlsson, Alex Tuch, and Shea Theodore before their demands get out of control, and possibly enter back into the Erik Karlsson sweepstakes.

This season has been awesome, and hopefully, it’s not even close to coming to a close. All the while, the cupboard is full of young talent after the 2017 Entry Draft. But the best part of the Golden Knights future is freedom. They can do whatever they would like, whenever they would like moving forward due to their wide open cap.

We’re not even through with year one in franchise history, but the Erik Karlsson rumors had to have opened the eyes of the other 30 GM’s that the Golden Knights may be good now, but they should be even better for a long while in the future.