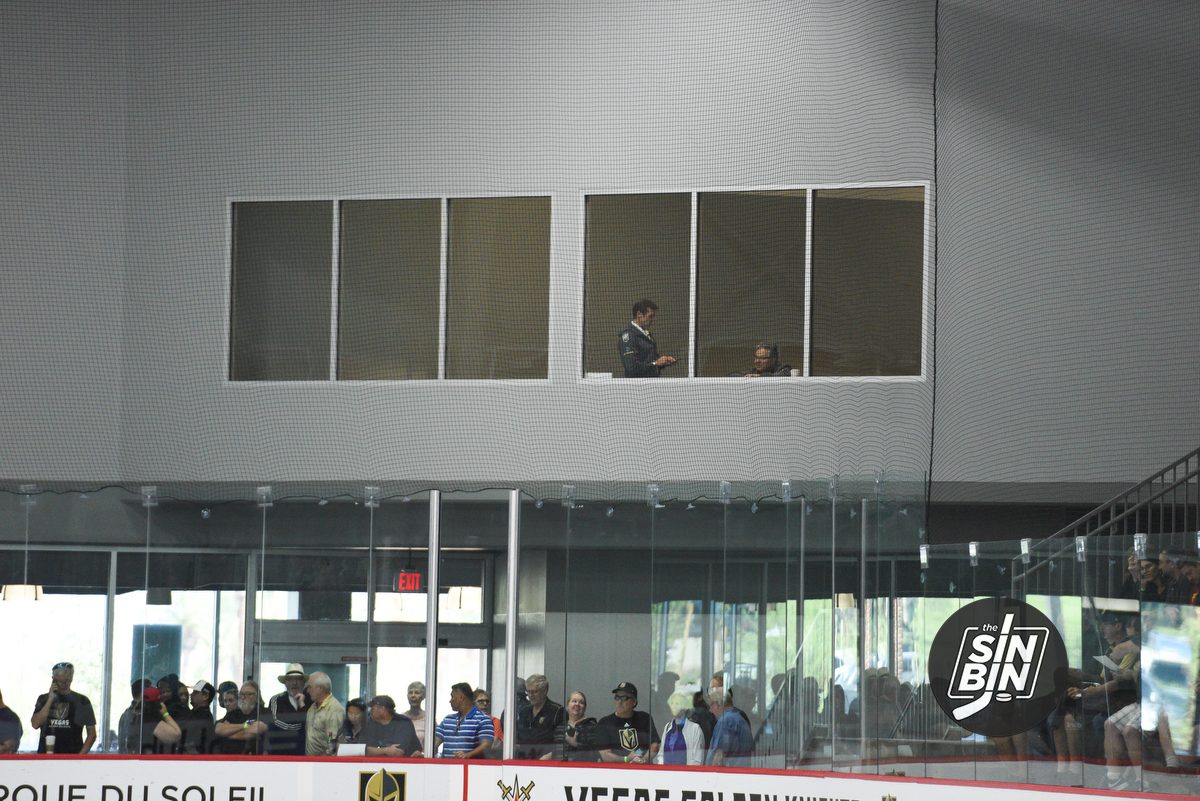 How confident are you in the Golden Knights front office?

That’s the question The Athletic’s Dom Luszczyszyn asked more than 2,000 fans in an attempt to rank all 31 teams. The entire breakdown of how it was conducted and full results can be found here, but since there’s a paywall at The Athletic I’ll tell you some stuff myself. The most important piece of info is that very few Golden Knights fans voted, so a majority of the poll is viewed through the eyes of other teams’ fans.

That being said, the Golden Knights fans that did vote showed supreme confidence in George McPhee, Kelly McCrimmon, and the front office, while the rest of the fanbases weren’t nearly as kind. 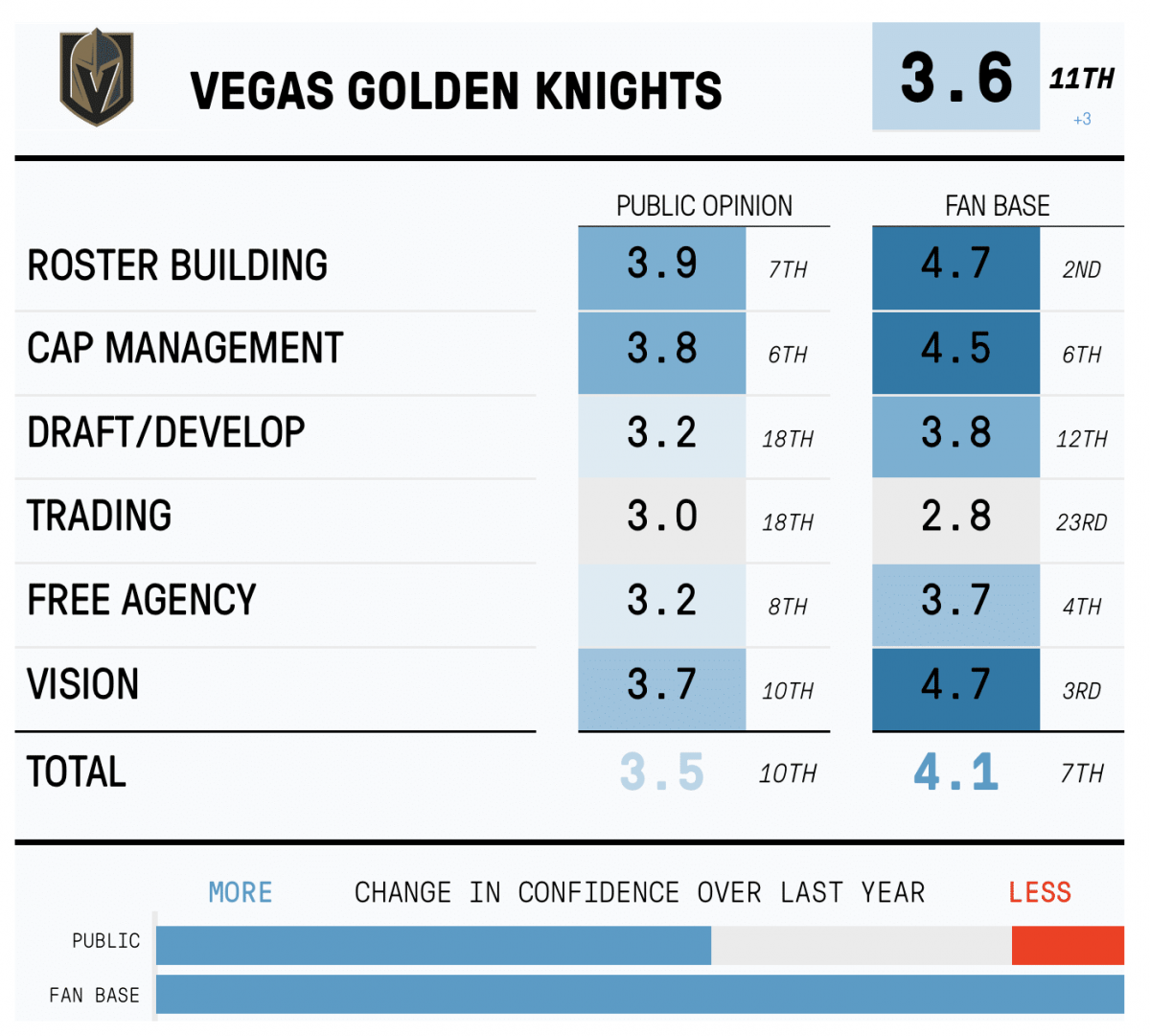 11th place seems a bit ridiculous for the Western Conference Champions whose roster didn’t exist at this time 13 months ago. Even the fanbase only voted high enough to rank the Golden Knights 7th too.

Here at SinBin.vegas, we were not able to vote, so here’s how we would have voted with a little description of why for each section. We’re also going to extend the voting to you guys using polls on Twitter. Vote on Twitter, see the results below. (Note: We don’t have the exact questions, so we are simply going off the words listed in the poll results. Therefore, as you’ll see in our responses, there can be different interpretations for each category.)

Ken: This roster was supposed to be absolute garbage. Even with the better Expansion Draft rules, most people (myself included) looked at it and said they would be the worst team in the league. They are so far from that it’s not even funny. Instead, they have an elite first line, a ton of balance throughout the rest of the forward group, a solid defense corps with a bunch of upside, and a Vezina quality goalie. Quite frankly, no one in the world could have built a better roster than this one from what was available, and the only team capable of beating McPhee’s new team was his old one. If there was a number higher than 5, I’d vote for that.

Jason: Coming to terms with William Karlsson was the biggest priority for Vegas this offseason. Karlsson signed a team-friendly deal that could set him for a big payday down the road. Extending Colin Miller was another move the Golden Knights should be happy with. Controlling young talent is a major benefit Vegas management takes advantage of, which is a smart strategy building a future roster.

How confident are you in the Golden Knights front office when it comes to "Roster Building"?

Ken: It’s probably still a bit premature to be voting on this as they haven’t signed enough contracts to mess up the cap yet. However, most of the contracts they’ve signed look pretty good against the cap. Of course, that can change in a hurry if a guy like Fleury, Tatar, Stastny, Marchessault, or someone else doesn’t live up to the number they are being paid. If I was allowed to do decimals it would probably be closer to five than four, but a perfect score just doesn’t seem right on cap management because we haven’t seen enough play out yet.

Jason: How can the Golden Knights front office be judged for cap management? After the offseason paperwork was filed, the 31st franchise is $8.69M under the cap. Sure, Ryan Reaves signed an inflated two-year deal, but McPhee locked in arguably the best line in hockey for a grand total of $15.25M. How’s that for cap management?

How confident are you in the Golden Knights front office when it comes to "Cap Management"?

Ken: I’m judging based on what we know from the Golden Knights system and at this point, there hasn’t been a ton of developing. It doesn’t appear likely any of the top four picks from the 2017 Entry Draft will be ready to make the team in 18-19, the few young players they acquired or signed have all been average AHLers at best, and the only younger players having an impact were drafted and developed elsewhere. None of this is a cause for concern yet though. It’s in McPhee’s nature to, I’ll use his word, “overcook” prospects, so it’s too soon to really ding the Golden Knights front office on drafting and developing at this point, but I was forced to vote, so it’s a three for now.

Jason: Again, how can the Golden Knights be judged after two NHL entry drafts? Franchise prospects Cody Glass, Nick Suzuki and Erik Branstrom are still teenagers and aren’t expected to play with Vegas until 2019-20. Hard to critique all three players after their first year of professional development. However, the Golden Knights are on track to develop successful NHL players according to multiple prospect rankings.

How confident are you in the Golden Knights front office when it comes to "Drafting and Developing"?

Ken: Yes, I’m aware that George McPhee was the mastermind behind the Martin Erat for Filip Forsberg deal. Yes, I’m aware he is also the guy who gave up a 1st, a 2nd, and a 3rd round pick for Tomas Tatar. But people, do I really need to remind you of what this guy did at the Expansion Draft? Apparently, I do. Look…

Reilly Smith, Alex Tuch, and Shea Theodore were all acquired via trade. He also got assets in return for selecting Marc-Andre Fleury, William Karlsson, Jonathan Marchessault, and William Carrier. Plus, there were multiple 1st round picks added and Nikita Gusev might be the best prospect in the Golden Knights system. These are all trades! I could argue for a five, but Erat will always subtract one point.

Jason: Going back to the 2018 NHL trade deadline, the Golden Knights added two players to their 2017-18 and future roster. Tomas Tatar, a perennial 20 goal scoring winger is paid $5.30M for the next three seasons. His deal could look like a major steal by Vegas once Tatar’s term ends in 2020-21. The one minuscule knock on the front office is the inability to trade for Erik Karlsson. It’s hard to beat up on Vegas when they have to deal with Ottawa GM Pierre Dorion.

How confident are you in the Golden Knights front office when it comes to "Trading"?

Ken: In year one the Golden Knights prize free agent was Vadim Shipachyov who was signed well before July 1st. Then on the opening of free agency prior to the Golden Knights inaugural season, McPhee went for singles rather than home runs. He hit a few with Brad Hunt, Oscar Dansk, and Maxime Lagace. This year the approach was similar, but with the addition of one big fish in Paul Stastny. I expect one of the “singles” in Daniel Carr, Curtis McKenzie, Jimmy Oligny, or someone else to make an impact, and I expect Stastny to do much more than Shipachyov, but am I overly confident that this front office is dominant in free agency, no, I’m not.

Jason: The addition of Paul Stastny makes the Golden Knights better down the middle, but other newcomers like Daniel Carr and Nick Holden could turn out to be nothing more than depth signings.

How confident are you in the Golden Knights front office when it comes to "Free Agency"?

Ken: Not long ago the plan was for this team to be great in three years and really great in six. Well, they are great now, and I don’t think the original plan was altered to make it happen. So, that means I think they’ll be really great soon and really really great not long after that. I wish I had a better idea as to whether or not Erik Karlsson was a part of that vision, but whether he is or not, I’m confident the boys in the second floor of City National Arena have a good idea of what they’re doing and how to get there.

Jason: It starts from the top, and The Creator is as committed as they come. I know most owners say they’ll do anything to win, but many of them are fibbing. He has the vision to win now and the eye for the future. The owner was reportedly very supportive of the rumored Erik Karlsson trade in February. When a first-year owner attempts to trade for one of the best players in the world, it’s clear he’s committed to winning. The Creator’s winning vision is one Vegas fans should feel confident about. It’s all about Cups and rings (and notice those words are plurals).

How confident are you in the Golden Knights front office when it comes to "Vision"?