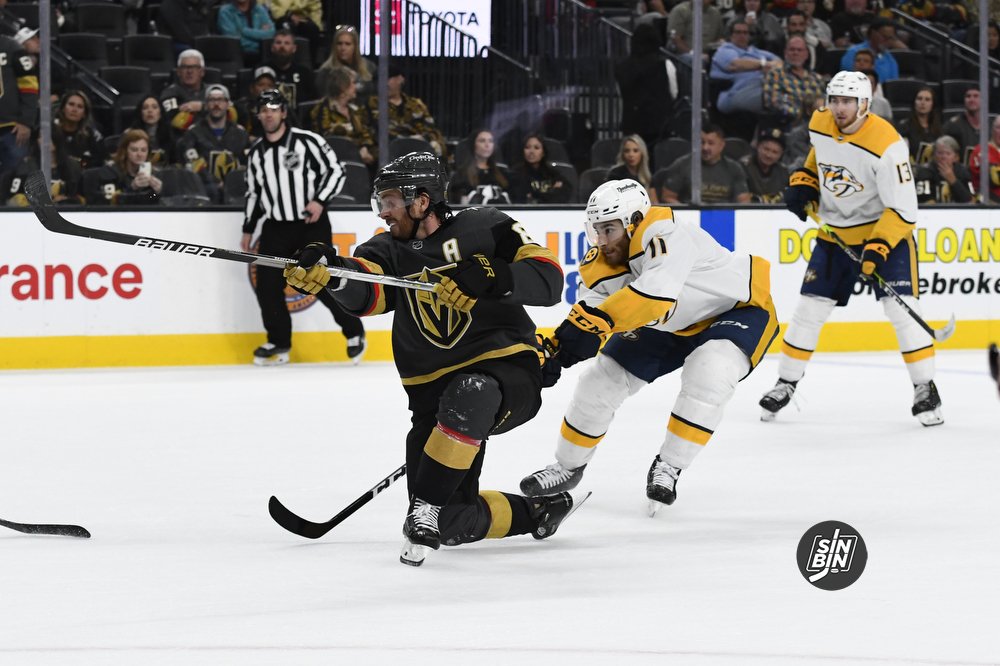 For the first time in a long time, the Golden Knights enter the season without a clear picture of exactly where they stand in the Pacific Division. There’s an easy argument to be made they remain among the top contenders but it’s also not hard to point to the offseason as a reason why they may not.

Let’s stay on the positive side today and take a look at what must happen for the Golden Knights to raise their third divisional banner in six years. If Vegas hit every one of these marks, they’ll not only stroll into the playoffs, but they’ll win the Pacific.

Brett Howden, Nic Roy, or someone else with fewer than 100 career points scores 60 points

One of the biggest questions for the Golden Knights this season is depth. While they have a host of NHL-quality players slotted to play in the bottom-six, there aren’t many proven scorers among the lot. Howden and Roy are the clear favorites to take the massive step forward, but names like Paul Cotter, Brendan Brisson, Sakari Manninen, Jonas Rondbjerg, or a few others could make the leap as well.

For the Golden Knights to truly operate as a dominant force in the division, they’ll need an unexpected boom in scoring from someone. It doesn’t matter where in the lineup it happens either. If the player does it on a line with Jack Eichel or Mark Stone, it will leave a more established scorer to bolster the third line. Or, if it happens on a third or fourth line, Vegas will be able to load up their top-six.

No team can afford to lose their best players for a significant time, but some are able to withstand it better than others. The Golden Knights are not set up well to stem the tide of any of their biggest offensive guns are missing. Vegas need scoring out of all five of these players and they all will carry huge responsibility defensively against the opposition’s best. If one or more are lost for anything longer than a week here or there, the roster shuffle that will need to take place will leave an already shallow roster with major holes.

VGK are set up a bit better defensively to hold up if Pietrangelo were to go out, but the minute-load he shoulders and his importance in transition offense will be irreplaceable by the likes of Ben Hutton, Kaedan Korczak, or Daniil Miromanov.

The team the Golden Knights bring into camp on paper is certainly good enough to win the division, mainly because of the roles everyone falls into at full health. They’re stocked up the middle, have a strong top-six, boast an eclectic mix of defensemen, and have just enough depth to fill out a full 18-skater roster. They’ll hold up just fine if they miss one or two guys not listed above, but even just a month without any one of their best guys will be costly.

Bruce Cassidy’s “goalie-friendly” system relies on keeping the puck out of the center of the ice and winning to loose pucks in front of the net. During his tenure in Boston, the Bruins were consistently one of the most difficult teams to create high-danger scoring chances against. Last year, and at times during the first three seasons, the Golden Knights failed in this category.

If Cassidy’s defensive system fits in Vegas as well as did in Boston, it will quell the goaltending concerns as at least one of Logan Thomspon, Adin Hill, or Laurent Brossoit will be able to hold down the fort. The scoring woes that have plagued the Golden Knights will be tempered also because it will only take two or three a night to win most games.

The Golden Knights have done it before and they still have many of the players that led the team to a Jenning’s Trophy, but they slipped last year, and getting it back is the only way to returning to the NHL’s elite.

The final piece comes on special teams. Cassidy is well-known as a wizard on the power play and it’s widely expected that VGK will improve on their 18.4% clip a year ago. The question lies more in the penalty kill though. Vegas finished last year killing penalties at just 77.4%, which was good for 21st best in the NHL.

So, combined, the Golden Knights special teams finished with a percentage of just 95.8%. Only seven teams were worse, and six of them finished among the bottom ten in the overall standings last year. 106% is a lot to ask, but six different teams did it a year ago. All of them had a penalty kill of at least 82% or top ten in the league.

For the Golden Knights to do it, it’s going to take a drastic improvement by both units. If they do, pretty much every other issue the team has will disappear as the dominance on special teams will make up about a goal a night.

So there you have it. Do these four things and the Golden Knights should cruise to a 105+ point season and crush the rest of the field in the Pacific.

Tomorrow, we’ll do the opposite, and explore what must happen for the Golden Knights to miss the playoffs in back-to-back years.