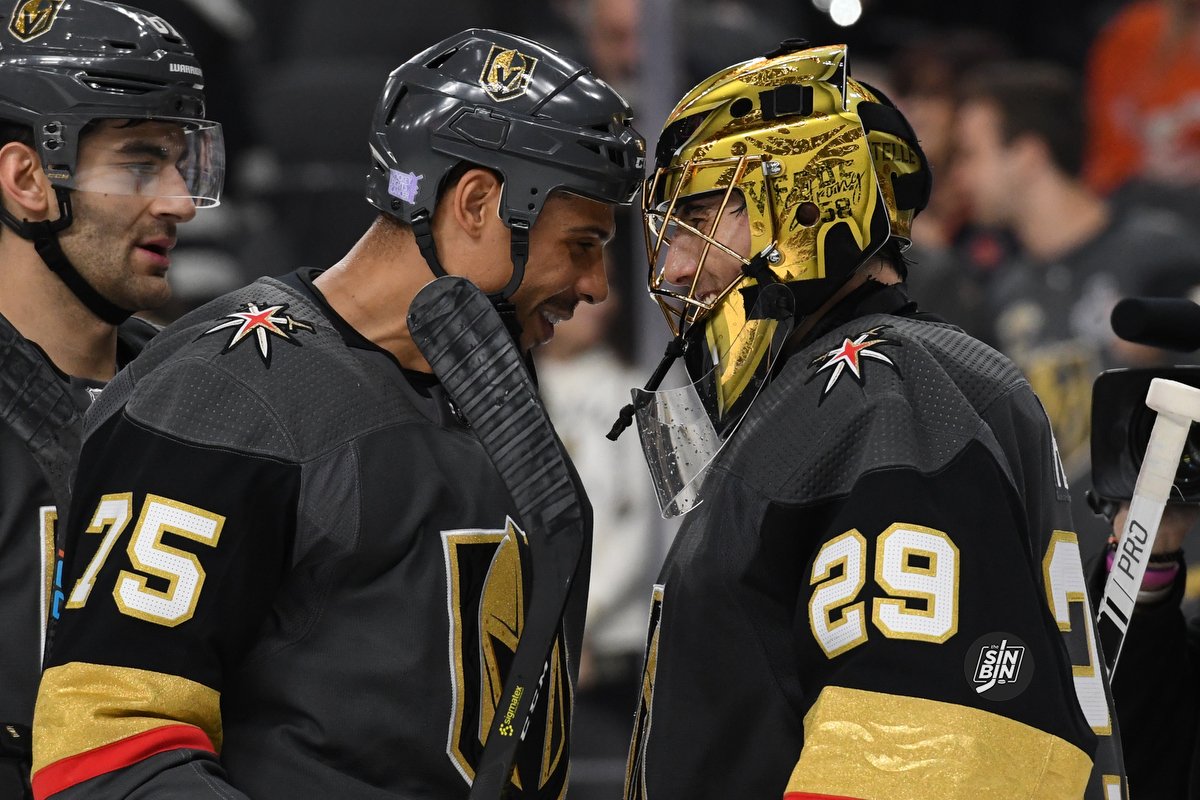 It was a good old-fashioned Vegas roast on the latest episode of the Spittin’ Chiclets podcast. Host Rear Admiral and former NHL’ers Ryan Whitney and Paul “BizNasty” Bissonette welcomed Golden Knights star’s Marc-Andre Fleury, Nate Schmidt and Ryan Reaves to an evening at the Friars Club.

Coming right off the faceoff, the trio wasted no time bagging on Vegas’ early struggles, and Nate Schmidt’s suspension.

What happened early in the year? -Bissonette

Couldn’t tell you about the first twenty. -Schmidt

Schmitty let us down, you know. -Fleury

After Fleury cracked up the room with his playful knock on his teammate, the gang asked Schmidt to get into his little stint in Vienna.

I would practice, I’d get bag skated everyday by this Finnish coach. He would come out with no stick, no gloves and put his hands behind his back and just skate up and down the ice. Fifteen laps was their pregame skate one day. I got back to the bench and looked up in the stands at the GM and go, ‘where am I?’ I’m going to be in the best shape of my life when I go back.” -Schmidt

Bag skating is a term players use when coaches are riding them hard in practice. It might be before or after practice, and it could be a variation of laps, goal line to goal line sprints, or suicide laps. Which are even exhausting to think about.

Schmidt was asked if he traveled with the Vienna Capitals, his adopted club. The never bashful defenseman, although ashamed, openly admitted to some sweet star treatment in Europe.

I went on the road with them one game. The only problem was, this is terrible, the GM and I flew to this place and the rest of team bussed it. It was a nine hour bus ride from Zurich… I was rested. -Schmidt

The Golden Knights defenseman added that training in Vienna was…

Once, in a lifetime experience -Schmidt

After ribbing #88 enough, the Spittin’ Chiclets hosts moved on to Reaves, and his dustup with the Capitals Tom Wilson.

I didn’t even think it was interference. He was looking at his pass… I was just finishing my hit. He did the same to Marchy last season… it’s no secret we don’t like each other. I hate him, I’m sure he hates me. We play the same kind of style. You know, one nothing. -Reaves

A former slugger himself, Bissonette who is friends with Reaves and Wilson, is convinced the two will connect once their careers are over. To which Reaves replied.

I’m sure. Because I f**king hated you (Bissonette) on the ice. -Reaves

Sure Reaves is the baddest man in the league right now, but after meeting Georges St. Pierre, #75 knows his boundaries.

I see these (UFC) guys in the bar, and I’m like I’d bang you out. Then you run into them, and your asleep the next night. It was crazy. -Reaves

A big GSP fan in his own right, Fleury laughed with the Chiclet crew about his hockey bucket list. A fight, and a goal.

Yeah. In junior’s I fought twice. One time I broke my knuckle so the coach wasn’t happy about that. I’ve always wanted to score a goal and have a fight. -Fleury

This is the closest Fleury ever got to getting into a brouhaha in the pros.

The roast was about 45 minutes long and is easily one of the funniest interviews you’ll hear. Because of the loose, raw nature of the podcast, Reaves, Schmidt and especially Fleury open up in ways you’d never expect. They are hockey players after all, so of course there’s plenty of off-color language.

If you tune in, you’ll also get to hear Schmidt rip on quiet crowds across the league compared to the T-Mobile Arena.

It’s so loud. It’s honestly hard to play on the road sometimes. It’s so quiet. -Schmidt

I didn’t even hear of him (William Karlsson) to be honest. -Reaves

I don’t know man. I still have like three more years. I start thinking about it. -Fleury

Check out the entire interview.

It begins :38 minutes into the podcast. If you listen through this one, you’ll be a Spittin’ Chiclets fan for life… and a Schmidt, Reaves and Fleury fan for life. As if you weren’t already.

The Golden Knights Keep Finding Ways To Win, Even Without Key Pieces