First Time At T-Mobile Not Kind To Opponents

It’s a story that’s been somewhat beaten to death over the course of the season, but with the Golden Knights having home-ice advantage in the Stanley Cup Final the impact of T-Mobile Arena will play a role in the series.

The Golden Knights finished the regular season with a record of 29-10-2 at home and have built on that with a home record of 6-1 in the playoffs.

Plus, in each of the three playoff games, the Golden Knights scored within the first five minutes of the game. 3:23 in against Los Angeles in Game 1 Round 1, 4:31 in against San Jose in Game 1 of Round 2, and 0:35 in against Winnipeg in Game 3 of the Western Conference Finals.

First off, the Vegas Golden Knights are a really good hockey team. Beating good teams on the road is challenging for anyone, let alone having to do it against a team that is equal to or better than you.

Next, Vegas Flu. We can act like it didn’t exist in the regular season, but there’s pretty clear evidence to the contrary. Multiple teams claimed to have hosted their “rookie dinner” in Vegas, a few teams completely changed travel plans in order to avoid it, and there are countless anecdotes of NHL players being seen at the tables, clubs, and bars on the Strip. 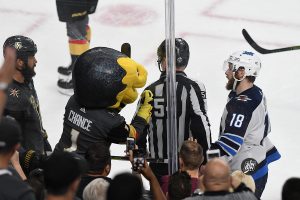 There’s also a giant Gila monster running around. Not sure what effect that has, but it’s got to be something. (Photo Credit: SinBin.vegas Photographer Brandon Andreasen)

Finally, there’s something different about T-Mobile Arena compared to any other arena. It starts with the sound system. It’s absurdly loud, so loud that the day they gave away Chance Bobbleheads, you could see it bobble when songs would have low bass. That bass pumps during warmups, when the Golden Knights hit the ice, and every time the puck is out of play. Add that with a building built to be loud for hockey and a fan base that’s become rabid for their team and you’ve got a special environment in the NHL.

It takes a little bit of time to get used to and it’s been clear to see as many teams (including the Capitals) fell behind the Golden Knights early. Alexander Ovechkin described the atmosphere as a “pool party” or a “nightclub.” Like everything in Las Vegas, it’s not normal. Just ask the only two guys on the Golden Knights who played here as visitors.

It’s way different (than other buildings). They put on a show, it’s a Vegas show with a hockey game going on. The energy is unlike any city in the league. It’s loud, everybody’s partying, it’s a very unique building. -Ryan Reaves

I feel like it’s a huge show out there. The guy who does the entertainment does an unbelievable job. He always knows how to get the crowd going and he even gets the players going. It’s amazing. -Tomas Tatar

That’s what the Capitals have to face in Game 1 of the Stanley Cup Final, and that’s good news for the Golden Knights.