When the Expansion Draft ended there was a lot to look at. There were well-known veteran names, there were up-and-coming goal scorers, there were puck-moving defensemen, and there was a heaping pile of bonus draft picks.

Then there was Alex Tuch. 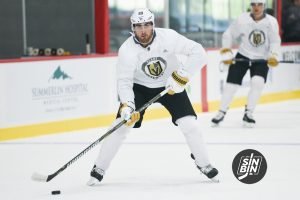 Give me Leipsic or give me death! (Photo Credit: SinBin.vegas Photographer Brandon Andreasen)

One of just two players the Golden Knights gave up an asset to acquire (the other was Reilly Smith), and a prospect that was unlike anything else in the Golden Knights system. A big strong forward with good speed and an innate ability to put the puck in the net. Oh, and he’s 21-years-old, an age that was difficult for the Golden Knights to find players due to the expansion draft rules.

Despite not participating in any previous NHL Entry Drafts, Alex Tuch became a Golden Knights first round pick. Having given up a pick and letting the Wild “escape” the Expansion Draft (didn’t really work for Minnesota), George McPhee put a lot of stock in Tuch. Unlike Shea Theodore, who had just finished up dominating the NHL playoffs, Tuch was unproven at the NHL level. He was a true prospect, and he had/has to be good.

Showing his commitment, Tuch showed up to Development Camp, he came back early for Rookie Camp, and he was always one of the last guys on the ice during full Training Camp. He was putting in the work, his talent was showing, and he appeared to have a spot on the Golden Knights roster.

Due to what was called “a numbers decision” Tuch was sent to the AHL to begin the year. Four games later a pair of injuries opened the door and Tuch was ready to make his Golden Knights debut. In his first game, he scored and tallied an assist, and Vegas won. Since his recall, the Golden Knights have not lost a game at home.

But when the team went on the road, and Tuch wasn’t playing nearly as well. There was a change in his line as Erik Haula was moved away and Cody Eakin came in with Tuch and Oscar Lindberg.

I think with Lindberg we had a good line, we just weren’t finding the right chemistry. I don’t think I was playing well. -Alex Tuch

Recently, Brendan Leipsic was added to the line to replace Lindberg, and since, the results have been astounding.

Last night while playing together that line created 17 shot attempts while allowing just five. They were also on the ice together for two of the Golden Knights four goals. But more importantly than just the statistics, Leipsic’s addition to the line has brought back the Tuch we got used to in his first few appearances and the preseason.

I think Brendan (Leipsic) coming in gives us a different perspective and a different style of play. I don’t think it was necessarily Oscar (Lindberg), I just think Eakin and I started playing a little better and finding each other more. Brendan was able to jump in and provide even more energy and we created chemistry right off the bat. -Tuch 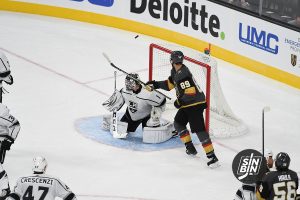 It shouldn’t be taken as a knock on Lindberg, because he actually elevated the play of an already good “fourth” line, but the facts are the fact, Tuch’s been better with Leipsic than he has Lindberg.

That’s the most important thing because as laid out so brilliantly in the first five paragraphs in this article, Tuch is crucial to the long-term success of the Vegas Golden Knights. He’s the future and if he’s not playing well, changes have to be made to figure out why.

With Leipsic on his line, Tuch’s aggressive forechecking has returned, and it’s in turn opened up opportunities for Eakin to create scoring chances. Look…

It’s what Tuch does best. When the puck is lost in the Golden Knights offensive zone, he is incredible at quickly stealing it back and putting Vegas right back in scoring mode. But that’s not all Tuch does well.

He does a great job down low, that’s where he does his best work, beyond the goal line. He’s a big guy, he controls the play down there and he’s hard to knock off the puck. So with Leipsic and I skating and Tuch holding on to the puck and going into the dirty areas it’s been really good. -Cody Eakin

And this is why he’s a better match with a Leipsic-type than a guy like Lindberg. The speed element Leipsic brings makes them as a trio incredibly difficult to defend. Leipsic’s speed, Eakin’s grittiness and hockey smarts, and the fact that you can’t get the puck away from Tuch (and even if you do he’ll get it back) make them a nightmare for any defensive pairing.

The line played real well. They had a lot of good chances. Alex Tuch is a good guy that can skate and compete. He’s trying to get the puck from down low. Leipsic played another good, solid game. He created some scoring chances and he worked hard. I thought the line was real good for our club. -Gerard Gallant 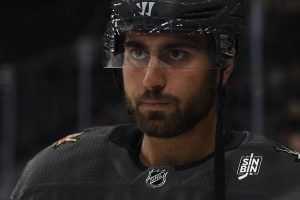 As much as we’re enjoying the 8-1 home record and dreaming of a playoff berth, Alex Tuch’s play and his continued development are what should really be exciting for Golden Knights fans. There’s a superstar budding in front of our eyes, and unlike some of the current fan favorites, this guy is 21-years-old, if all goes well, he’s going to be a central figure for the Golden Knights for a LONG time.