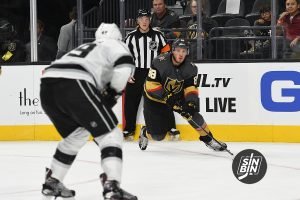 “I think we can win the series.” (Photo Credit: SinBin.vegas Photographer Brandon Andreasen)

Technically speaking, the Vegas Golden Knights are -140 favorites to win over the Los Angeles Kings in the first round. That’s the line at William Hill Sportsbooks which essentially indicates that they believe there’s about a 55-60% chance the Golden Knights will win the series.

When it comes to looking at the selections of many experts, the Golden Knights have definitely been selected less than the Kings, but that doesn’t mean no one is taking Vegas. Here on SinBin.vegas, we believe the Golden Knights are absolutely the favorites and think they’ll win in five games.

All of these opinions have turned the Vegas vs. Los Angeles series into one of the most intriguing of all eight matchups in the first round.

Yeah. I mean, do we have a Drew Doughty or an Anze Kopitar? -Jonathan Marchessault

But you won the Pacific Division though? -SinBin.vegas

As a team yeah, but some of the best players in the world are on the other team and when you have that people expect you to win. -Marchessault

Are you guys favorites in this series? -SinBin.vegas

Going in though, do you feel like you are favorites or are you dogs? -SinBin.vegas

I think we can win the series. -Schmidt

Are you the favorites? -SinBin.vegas

So you are an underdog? -SinBin.vegas

No. (laughter). Both teams won two games in the regular season and they were close games. I think it’s going to be two great hockey teams battling it out. They’ve got a lot of experience, that’s what I look at. Their team’s been together a lot, but that hasn’t affected us. I’m very confident in our group. I love our group. They’ve played hard all long, so we’ll see what happens. -Gallant

Let’s put it this way, no one really knows, and that’s what makes this such a fun series. No matter what you put stock in, you can come up with a compelling argument for both sides.

Underdogs, favorites, somewhere in between, who know’s who is actually right. All we really do know is we’re about to find out.