As we watched last night, a hockey game is a story of three periods… and sometimes an extra :12 seconds. 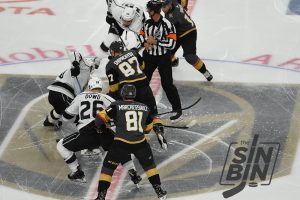 Forget the outcome, one storyline of the game was first-period faceoffs. Specifically, losing them. After the first 20 minutes, Vegas lost over 80% of the draws. The Golden Knights did get better as the game went on, but overall they won 25, and lost 32 faceoffs. Based off last year’s stats, the Golden Knight’s 43% FOW would be way below the league average. Okay, now is about the time I give the disclaimer… It’s only preseason. But we still had to ask.

Yeah, they were bad in the first period, obviously, you pride yourself from winning faceoffs. We had a tough time in the first period on faceoffs. Again, I thought we played a good eight or 10 minutes of that first period really well. After that we fell asleep for about 25 minutes in the middle part of the game… – Gerard Gallant

He later acknowledged that his players settled in, and improved their FOW percentage.

The faceoffs got better as the night went on. I think it’s just about guys going in there and battling and winning one-on-one battles in the faceoff circle, we didn’t start out real well.” -Gallant

One reason for the second and third period improvements was Cody Eakin. At one point, the center won five straight faceoffs. He mentioned after the game that he aims to win 50% of draws. Eakin went on to say, the team knew they were struggling after the first period. Defenseman Nate Schmidt was well aware of his team’s faceoff issues.

Schmidt is confident his new teammates will adjust though.

“Some (guys) are just used to different ways, and they’re just getting adjusted to it. Most of our guys have only played two games with the new rules. You can do it in practice but it’s not the same as when there is a linesman.” – Nate Schmidt

This faceoff rule is an absolute joke… That’s how you ruin the game of hockey, by putting that in there. They’re gonna have to do something about that because we can’t play this year like that. -Brad Marchand, Bruins forward to WEEI.com

To be fair, the Golden Knights haven’t been this bad on draws all preseason. In Anaheim, VGK centers won 55% of draws. Up in San Jose, the Golden Knights achieved 56% of faceoff wins. Overall, it’s an early reaction. So don’t panic yet. However, top center Vadim Shipachyov has won 22% and 40% of faceoffs in two games. Not to mention all of the times he’s been tossed from the circle. But it’s preseason…