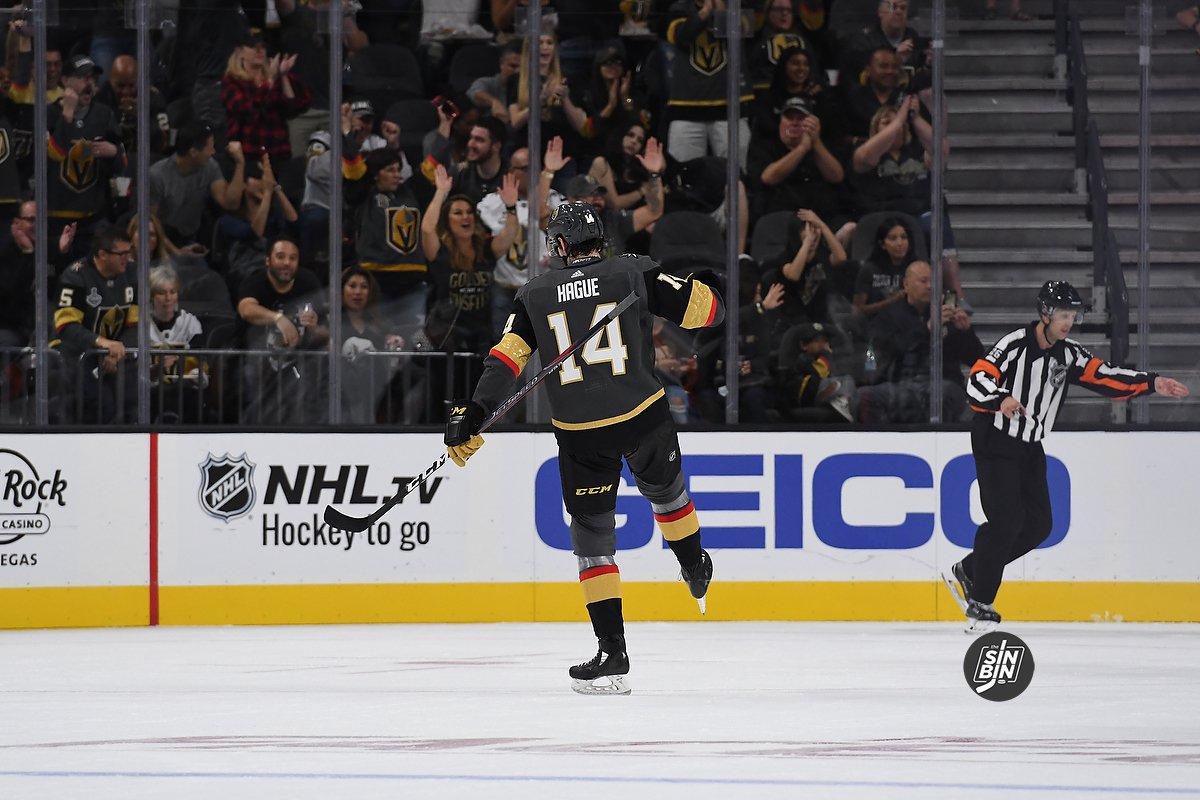 Well, it happened again. Following a night in which both Nic Hague and Nic Roy played in a win against Columbus, they were optioned to the AHL. This morning, they were called right back up and one or both may play tonight against Toronto.

Being shuttled back and forth between the AHL and NHL isn’t new for the Nics. It has happened to Roy three times and Hague twice. They are sent down with the idea of eventually bringing them back up and sometimes it all happens within a day or two.

Golden Knights have once again re-assigned Nic Roy and Nic Hague to the AHL.

Try not to read into it too deeply as this mostly has more to do with salary cap space than anything. Wouldn't shock me if one or both are back as soon as tomorrow or later on this trip.

It’s about cap space we say.

Reminds me of one of my favorite lines in Seinfeld history when Kramer says “they just write it off.” He has no idea what writing it off means or how it helps businesses, but it sounds smart, so he says it.

They are accruing cap space, all the teams are doing it!

But how? Why? Are you sure?

If you nailed down most, they’ll eventually crack like Kramer and say “I don’t know, but they do it.” And the conversation would end there because let’s be honest, does anyone really care how or why it happens?

But, since you are still reading, you must be someone that cares. So, I’m here today to explain it. (After I spent most of my night last night reading through the CBA and having my buddy Hart from PuckPedia.com further explain it to me.)

The NHL has what they call an “upper limit” or a maximum amount of money a team can spend on their team salaries. This is often referred to as the salary cap. The idea behind it is to make it so that no team can go out and buy the best players and pay their way to a dynasty. There’s a crazy calculation to figure out what the cap will be each year, but that’s for another day. This year the upper limit is $81.5 million.

So, every day at 5PM EST, the league takes a look at every roster in the NHL, calculates the total amount of salary they have on their roster and makes sure it’s at or under $81.5 million. But, it’s not always as easy as simple addition. Instead, they use what’s called an “averaged amount” based on the player’s contract and the length of time he’s been on the NHL roster.

If a player makes $1 million and he’s been on the roster for every day of the season, he counts for $1 million against the cap. However, if that player was off the roster at any point, his cap figure comes down. Here, let me show you an example.

Got it? Ok, let’s move away from this mythical player and get back to the Nics, Hague and Roy.

Between the two of them going back and forth, they’ve saved the Golden Knights a total of a little more than $100,000 in cap space savings.

Shuttling Hague and Roy back and forth has already saved $100,000. By doing some math, that equates to a player making an annual salary of $465,000 if the player is added on the day of the trade deadline. And we’re still only in November so there’s still plenty of time to make that number a lot higher.

The Golden Knights will likely keep doing this over and over again throughout the course of the year, which will continually lower the value of Roy and Hague’s cap hit, and allow them some freedom to make a move at the deadline.

Say they were to trade a player off the current roster making $3.85 million. When you add in the $465,000 they’ve banked from sending the Nics back and forth, they can now add a player worth $4,315,000 if the trade is made on deadline day.

For those of you wondering, Taylor Hall makes $6 million and Alex Pietrangelo makes $6.5 million. No, they aren’t there yet, but they are a heck of a lot closer today than they were on October 2nd. Another 100 combined days of sending the Nics down means another $1.8 million at the deadline or a total of just over $6 million. Catch my drift?

But… there is one major catch in all of this, and that’s the human price being paid by the Nics. Both Roy and Hague are on what is called “two-way” contracts. That means they get paid a different salary when they are in the NHL than they do in the AHL.

But, you wanted Taylor Hall, right?

So, there you have it. That’s why the Golden Knights are playing ping pong with their two Nics and why my inbox is flooded with transaction alert emails from VGK.

Of course, this is just one aspect of the salary cap. There are things like performance bonuses, long-term IR, 35+ contracts, emergency recall, and a whole host of other situations that even further complicate it. We’ll let those slide for now, but just know that the Nic-shuttling that’s been going on has a purpose, and even though it sucks for the Nics, there’s a good chance it pays off big time for the Golden Knights come February 24th.

Now that you understand it, “don’t you wish you had the last 10 minutes of your life back?”

Huge stick tap to Hart from PuckPedia.com for helping me sort through all the madness that is the NHL salary cap. To see the daily cap hit numbers for the entire Vegas Golden Knights roster, be sure to check out PuckPedia’s VGK page. And, if you want more info, tweet @PuckPedia.