Early in the third period with the score is tied, the Golden Knights quickly reset the play after the puck was dumped out of the zone. They caught the Kings on a line change and the puck sat right in front of the Los Angeles bench. Players were jumping on and off the ice and a King going off touched the puck as he attempted to get off the ice. It was a rather clear “too many men” penalty, but it went uncalled.

It’s a preseason game, and the play was completely unaffected, but the T-Mobile Arena crowd was not ready to let it go unnoticed, and while they were screaming at the refs, they were also sending a message to the hockey world, this may be a new team to hockey, but these are not new fans. 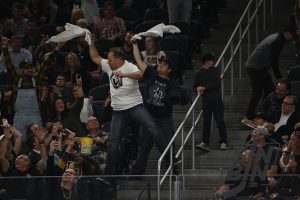 Throughout the entire game, there were noticeable cheers or groans at points of a hockey game where only diehard hockey fans would know to cheer. I’m talking moments like a questionable hybrid icing call, an excellent keep in the zone right on top of the blue line, a pass through the slot that was just too late, or a 2017 preseason slash that had T-Mobile Arena screaming curse words before the ref made the announcement.

There were 17,101 fans announced at the first preseason home game in Golden Knights history, and while the expectation was for a slightly baffled crowd waiting for moments like goals, fights, and big hits, the Vegas crowd delivered just the opposite.

The city’s buzzing for the team right now, and it’s a lot of fun to be here, but you never expect to have a sold-out crowd for the preseason and it was pretty close to that tonight. We fed off the energy and that’s what we’re gonna need all year. -Calvin Pickard 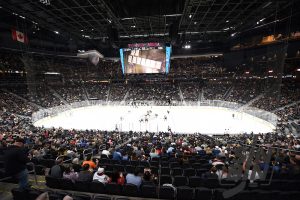 It was a hockey crowd and an educated one at that. Hockey is an easy game to understand on the surface, but with the speed of play and the nuances in the rules, it takes some time to really understand how to cheer for a game. In many past expansion arena, they would explain rules, make ridiculous announcements, and really go above and beyond to “teach the game.” None of that nonsense was necessary at T-Mobile Arena last night.

It’s only one game, and a preseason game at that, but if last night was any indication, Vegas already knows the game.