Disclaimer: There are a few gaps of missing information in this article that could change the overall numbers. We are working to fill as many of those gaps as possible and will update this article with them if/when we learn more. Nonetheless, we stand by the overall premise of the article and do not believe it will change radically with any of the additional information we are seeking.

It’s no secret, the Golden Knights are tight against the salary cap. In order to solve this issue, they are going to have to find a way to shed some salary. Of course, there are multiple ways to do this including trading players, waivers, buyouts, injuries, suspension, and likely more that we aren’t even aware of.

But, no matter which way you break it down, it’s a fact that something is going to have to happen to make sure the Golden Knights are cap compliant when all is said and done heading into the 2019-20 season.

Trying to guess exactly will happen will probably yield results about as accurate as when dogs pick winners by going for the treat on the left or the right. So let’s leave that for another day (plus, if you’ve listened to our podcasts or any of the many radio spots Jason and I have done over the last two months, you’ve probably got an idea of what we think is going to happen.). 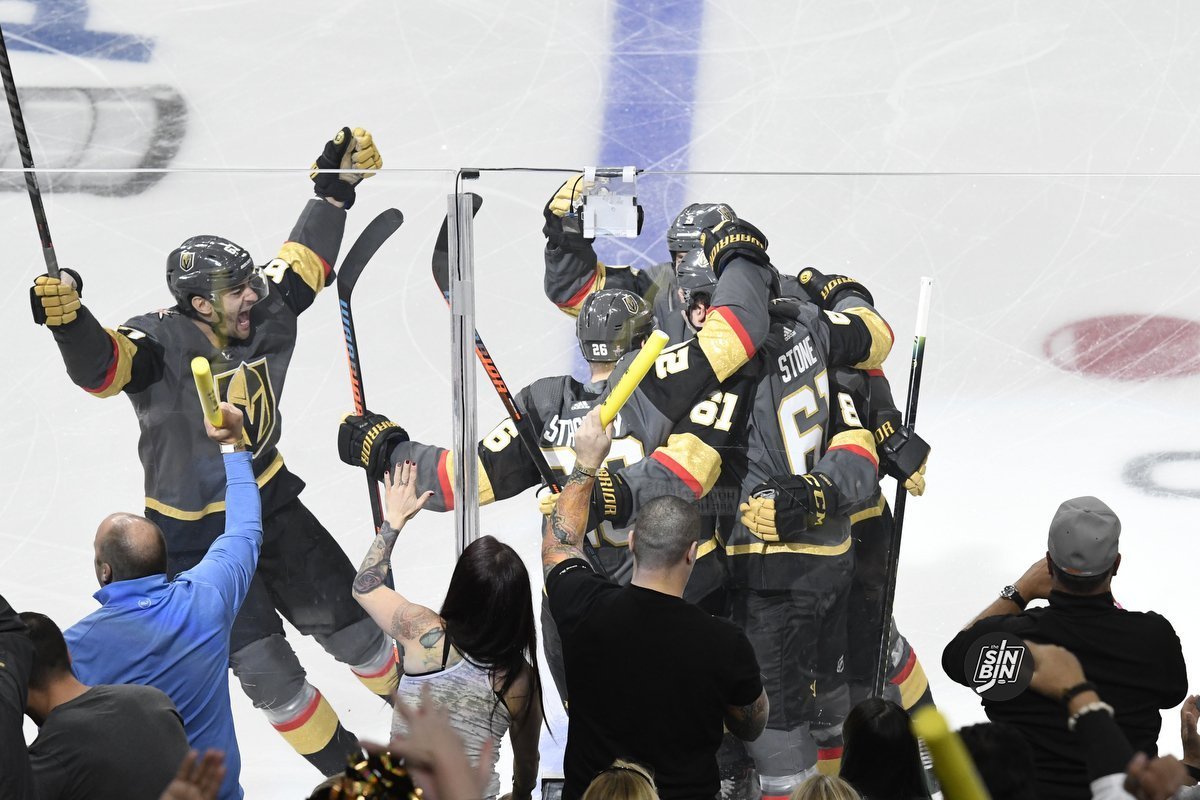 However, on July 1st, the 2019-20 calendar begins, and Mark Stone, Max Pacioretty, Marc-Andre Fleury, Nate Schmidt, and Alex Tuch’s new contracts will all kick in. That’s when the cap number starts to get tight. But exactly how tight is important in relation to when the Golden Knights must make something happen.

By rule, the CBA states that no team may cross the “Upper Limit” (a fancy word for the salary cap) at any time using their “Average Club Salary” (fancy way to say the total amount of money committed to players for the league year).

That “upper limit” number for the Golden Knights during the offseason is approximately $95.6 million. (For a complete breakdown of how I came to that number, see the end of the article.)

The CBA also states that there are eight categories of salary that are all added together to calculate a team’s “Average Club Salary”. Of the eight, the Golden Knights have a sum greater than $0 in four categories.

So, that means the Golden Knights have approximately $5 million to work with in signing their RFA’s above what they are currently counted against the cap (see below for those exact numbers).

Karlsson’s contract is likely to jump about two to three million and Gusev’s will likely take up the rest. That’s not even considering signing Schuldt, raises for Nosek or Subban, or the signing of qualifying offers by Bischoff or Hyka.

Meaning, in order to stay under the “upper limit” the Golden Knights are going to have to shed some salary prior to officially putting pen to paper on all of their RFAs. According to the CBA, NHL Central Registry will not approve a player contract that puts a team over the salary cap upper limit. So, even if they wanted to sign Gusev, Karlsson, or any of the other RFAs (or any of the UFAs that have not even been mentioned in this article yet) they must clear room below the $95.56 million “upper limit.”

So what does it all mean in relation to when a trade must go down? Well, that’s still a bit up in the air since technically they are going to be cap compliant on July 1st. However, the Draft sets a deadline of sorts as the only way to acquire and select players in the 2019 Draft is to do it on June 21st and 22nd during the Draft (duh). Otherwise and picks acquired would be for the 2020 Draft.

Aside from that though, in order to do much of anything on July 1st, the Golden Knights will likely have to clear some room. Again, they have just about $5 million to work with, so they technically could sign Deryk Engelland, Ryan Carpenter, Brandon Pirri, and/or Pierre-Edouard Bellemare, but that would leave a minuscule number available to lock down the contracts of the RFAs.

Add it all up, and it’s highly probable that the Golden Knights find some way to shed some salary prior to July 1st with a strong chance of it happening today or tomorrow during the Draft. But, even after all of this, there’s still technically a way for them to go to training camp with everyone on the roster and under contract.

Then the deadline will be October 1st (the day following the last day of training camp), and that one will require them to get down to around $87 million rather than $95 million.

Calculating the $95.56 million “upper limit” number for the Golden Knights.

We start with the “upper limit” as set by the NHL which we now believe will be $82.1 million.

Then we add the offseason “flexibility” exception stated in the CBA.

Then we throw in one more caveat and that’s David Clarkson. Clarkson was acquired during the Expansion Draft from Columbus. He suffered a career-ending injury years ago, but because NHL salaries are fully guaranteed, he can’t retire until his contract is over (otherwise he’d be giving up millions of dollars for no reason). His cap hit in 2019-20 is $5.25 million. The CBA does not specify this, but CapFriendly.com believes he can be placed on LTIR upping the Golden Knights limit to around $95 million.

LTIR can be used in the off-season while the 10% off-season cushion is active. -CapFriendly.com

The CBA states that the “Average Club Salary” is calculated by the sum of the following eight categories. Here is each category one at a time followed by the Golden Knights players with salaries that fall under each and each individual category’s sum.

(1) The Averaged Amount of the Player Salary and Bonuses for that League Year for each Player under a One-Way SPC with the Club; plus

(2) All Deferred Salary and Deferred Bonuses to be earned in that League Year (in accordance with Section 50.2(a) and Section 50.2(b), respectively); plus

(3) All Ordinary Course Buy-Out Amounts to be paid in that League Year (in accordance with Section 50.9(i)); plus

(6) The portion of the Averaged Amount a Club has agreed to retain for the SPC of any Player it has Traded to another Club as part of a Retained Salary Transaction (as described in Section 50.5(e)(iii) below); plus

(7) The portion of a Cap Advantage Recapture amount included in that League Year pursuant to Section 50.5(d)(ii)(A)-(B); plus

(8) With respect to any Player Salary or Bonus dispute between a Player and a Club (including but not limited to disputes arising under the Collective Bargaining Agreement expired September 15, 2012), any amount paid (excluding interest) in satisfaction of any award or judgment relating to, or settlement of, any such dispute, but only to the extent that such amounts have not otherwise been included in the Player’s Player Salary or Bonuses.